V.M. Varga is the main antagonist in the 3rd season of the television series Fargo. He is a mysterious gangster who manipulates Minnesota businessman Emmit Stussy into merging - and, in effect, ceding control of - his parking lot construction business into the criminal organization that Varga works for.

He was portrayed by David Thewlis, who also portrayed King Einon in Dragonheart and Ares in Wonder Woman.

In 2010, in the small town of Eden Prairie, Minnesota, Emmit Stussy and his lawyer Sy Feltz meet with a colleague of theirs, Buck Olander, about a a third party that Emmit's company took out a loan from last year and now intend to pay back now that their business has bloomed. Emmit explains that he had tried calling them on the number they gave them, but only heard clicks and buzzers coming from their end. Despite being the one who suggested they get a loan from said third party, Buck says he does not know much about them. Emmit recalls meeting their broker, Rick Ehrmantraut, and has not heard from them since. Buck does not give a response and Emmit dismisses him. Before leaving, Buck asks Emmit about meeting with a widow named Mrs. Goldfarb, a "storage queen" who is looking to be a silent partner for them. At the Stussy residence, Emmit gets a phone call from Sy, who tells Emmit that the "clicks and buzzers" number contact came to the office, but it is not Ehrmantraut. Emmit arrives at his office where Sy is waiting with their contact, V.M. Varga.

Emmit explains to Varga that they are ready to pay back the loan, which turns out to be one million dollars, in interest now that they are in the black. Varga tells them not only to keep the money, but it was an investment rather than a loan. Emmit and Sy insist on paying the money back as they are legally bound to do so, but Varga argues that it is merely a piece of paper. He goes on to explain that now is not the time for questions. After a year of studying Emmit's company, Narwhal now has means of disguising their activities. They have full access to their systems which will allow them to monitor the company's activity. Varga tells them not to mention this to anyone as he leaves, leaving the two of them in shock. Emmit asks his lawyer to investigate V.M. Varga, which leads to the lawyer's computer crashing and then him being thrown off a parking garage by Varga's men. Varga then moves his henchmen, Yuri Gurka and Meemo , to a wing of Emmit's offices that are not in use.

Varga arrives unannounced on Emmit's doorstep and the two have dinner together. Varga manipulates him into officially signing him on as a partner, promising to make Emmit a billionaire. St. Cloud policewoman Winnie Lopez, who is investigating the hit-and-run committed by Sy, goes to question him, as the car was registered to Emmit's firm. Sy acts very suspiciously, unnerved as Varga's men are watching. Some time after Varga is seen sitting on Sy's Office by Sy, when he goes to confront Varga his henchmen appears and Varga punishes Sy, by making him drink the water on his mug that Varga has put his genitals on. Emmit has a meeting with Varga, who states his distrust towards Sy and suggests Sy and Ray, Emmit's brother, may be working together to bring down Emmit. Nikki, Ray's fiance, meets with Sy but their meeting is interrupted by Yuri and Meemo, who brutally beat Nikki as a traumatized Sy watches before fleeing. Ray returns home to find a badly bruised Nikki collapsed in an bathtub. Ray and a still-recovering Nikki plot revenge against Yuri and Meemo but are forced to use caution when they see them with Varga. Emmit and Sy listen to Varga's plan to expand Stussy Lots by 16 garages within 3 months; Sy is wary, but Emmit seems eager. Gloria and Winnie want to question Emmit, but Varga curtails the meeting. The two officers then knock on Ray's apartment door, so he and Nikki check into a motel room, not knowing Varga has ordered a hit on them. Ray forgets his money and returns to his apartment to retrieve it. There he finds Emmit, who offers to end the feud by giving the framed stamp to his brother and anything else he may want. Ray is leery and they argue. When the frame accidentally breaks in a shoving match, a shard of glass severs Ray's carotid artery, killing him. A distraught Emmit calls Varga who manages the situation, suggesting that Ray abused Nikki, causing previous injuries, and she retaliated.

Varga, inside Emmit's home, asks how he feels; Emmit says "free", now that Ray is dead. An attempt is made on Nikki's life in her jail cell, but Gloria saves her. The uniformed assassin, Golem, makes a clean getaway. Nikki, thankful for Gloria saving her life, tells her and Chief Dammik to follow the money. Having violated parole, Nikki is put on a state prison bus and is seated next to a disheveled-looking Mr. Wrench. With an elaborate ramp, Yuri causes the bus to overturn, and he and two accomplices enter. They fail to kill nikki, Golem is killed by Mr. Wrench and Yuri is wounded. Back to emmit's house Sy is poisoned by Varga, sending him into a coma.

Yuri has gone missing, and Varga has expanded Emmit's business after becoming the sole partner of Emmit. While visiting Sy, Emmit is approached again by Gloria and Winnie and is shocked to discover his late brother's car parked in his parking space. Further abnormalities occur when Emmit discovers all the pictures in his office have been replaced by photos of the infamous stamp, and that someone has placed a fake mustache on him while he sleeps. Emmit starts to become incredibly guilty over the fact that he killed his brother and starts to believe that either Ray is still alive or Nikki is plotting revenge. Varga tries to give him tranquilizers to calm him, which Emmit feigns taking. Later, Emmit arrives at the police station, where he announces to Gloria that he has come to confess. Marvin Stussy, a dentist in St. Cloud is killed in the same manner as Ray. Emmit is interviewed by Gloria and talks freely about his manipulation of Ray in taking the stamps instead of the Corvette upon their father's death as well as his confession for accidentally killing Ray. Varga instructs Meemo to infiltrate the police station where Emmit is held to get him out. However, while Meemo is on the way, Nikki and Mr. Wrench ambush and commandeer his truck using a fake grenade. They steal financial information from the remote office inside to blackmail Varga for $2 million. Winnie alerts Gloria of the coincidental last name of the earlier assassination. George Stussy is also found murdered by asphyxiation in his kitchen, as Ennis was. Ex-con Donald Woo is picked up for the associated deaths from a witness viewing his plates and deliberately takes the fall for Emmit, admitting to all of the murders in his stead. Ruby, when interviewed at the station by Gloria about her dinner with Sy and Emmit, is vague about the details. The interview is interrupted by Chief Dammik's arrest of Woo, closing the case and resulting in Emmit's release, whose confession Dammik dismisses as Emmit's guilt over not helping his brother. Varga meets with Nikki, and in order to get out of the blackmailing he repeatedly attempts to hire her, but she refuses. Wrench neutralizes Varga's sniper, Meemo, and Nikki gives Varga 24 hours to pay her ransom or she sends the information to the IRS. Meemo and Varga pick up Emmit as he is released. Nikki sends an anonymous package with the accounts payable files from Stussy Lots is left on the desk of IRS agent Larue Dollard.

Agent Dollard finds Gloria's number in the Stussy Lots file. He calls her and Gloria arranges to meet Dollard, despite insisting that she did not send the file. Dollard explains to Gloria that Varga's takeover of Stussy Lots is intended as a tax fraud scam. After returning from the police station, Emmit is forced to sign many contracts, after which he grabs Meemo's gun and attempts to force Varga to withdraw from Stussy Lots. He is knocked out from behind by Meemo. Varga tells his crew to get rid of any evidence and they all leave. Varga, Meemo and the crew go to meet Nikki and Mr. Wrench to pay ransom for the hard drives, but are ambushed by Wrench. Meemo is killed, but Varga escapes. Three months later, Gloria, now an agent for the Department of Homeland Security, interviews Varga, going by the name "Daniel Rand" in a holding cell. She declares that in five minutes he will be going to jail for money laundering and six counts of conspiracy to commit murder. However, Varga asserts that in five minutes Gloria's superior will arrive and let him go free, which Gloria scoffs at. The show ends with Gloria counting down the minutes on the cell's clock, with Varga's ultimate fate left unresolved.

Varga meets Emmit and Sy for the first time

Varga parking his rig on one of Stussy's parking lots

Varga explains to Emmit and Sy the situation

Varga having dinner at Emit's house

Varga about to puke

"You have a fat wife"

Varga pees in Sy's mug before forcing him to drink it

Varga lifts Emmit from the police station after he confesses

Varga with Meemo about to deliver the Nikki

Varga escapes the ambush leaving Meemo and his men to die

Varga hears in terror as his men are slaughtered by Wrench

Varga waits for his fate 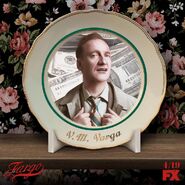 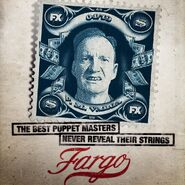 Varga's promotional stamp poster
Add a photo to this gallery

Retrieved from "https://villains.fandom.com/wiki/V.M._Varga?oldid=2506674"
Community content is available under CC-BY-SA unless otherwise noted.