Member of the Viet Cong

The Viet Cong Bookie, also known as the VC Bookie, is a minor antagonist in the 2010 video game Call of Duty: Black Ops. He is a member of the Viet Cong and ally of the Soviet Union, and was a bookie that collected bets from fellow guerillas when forcing American POWs to play Russian roulette. He only appears in the mission "Payback", where he forces Alex Mason and Frank Woods to play Russian roulette, which led to his and the Spetsnaz Operative's deaths.

He was voiced by Kevin Trang.

Due to him only appearing in one mission, not much is known about the VC Bookie's past except that he joined the North Vietnamese Army during the 1960s, and became a member of the Viet Cong. During this time, he became a bookie for fellow Viet Cong guerillas who made bets on American POWs who were forced to play Russian roulette.

The VC Bookie appears in "Payback", and is seen making a bet on American POWs Joseph Bowman, Alex Mason, and Frank Woods on who would survive playing Russian roulette. The bookie is spat on by Bowman, and proceeds to place a meat clever to the latter's neck, before telling he was dead. When the Spetsnaz Operative brutally executed Bowman for his refusal to play, the VC Bookie held Mason back, nodding his head to not interfere. Woods is then brought to replace Bowman, and the VC Bookie orders Woods to play roulette, putting a snub-nosed python on the desk. Becoming annoyed with the POW, the VC Bookie slaps Woods and orders him to shoot, but the latter survives. Woods then tells Mason to play roulette and use the python to kill the VC Bookie, whom orders Mason to shoot the revolver.

When Mason tells Woods "six and eight o'clock", the VC Bookie is confused, but is immediately killed by Mason by being shot in the neck with the snub-nosed revolver. Mason then uses the bookie's body as a human shield and collects his handgun to attack the other guerillas, but the Spetsnaz Operative escapes from the area and warns the Viet Cong soldiers in the tunnels. 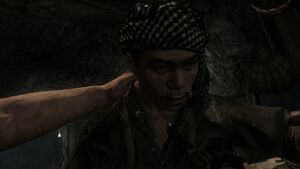 The VC Bookie moments before his death. 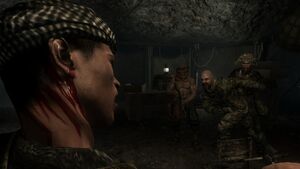 The VC Bookie's body being used as a human shield by Mason.