Member and recon of the Umbrella Security Service Delta Team

To complete his operation in Raccoon City (formerly).

VECTOR is a member of the "Wolfpack" unit of the Umbrella Security Services and one of the main villainous-turned-anti-heroic protagonists from the videogame Resident Evil: Operation Raccoon City.

He was voiced by Andrew Kishino, who also played Shang Tsung and Sektor in Mortal Kombat 9, Genra in Dead or Alive: Dimensions, Saw Gerrera in Star Wars: The Clone Wars, Fong in the 2012 Teenage Mutant Ninja Turtles series, Mitsuru Shinehara in Regular Show, Janja and Ora in Disney's The Lion Guard series, Joe in Batman: The Killing Joke, the Shredder in Batman vs. Teenage Mutant Ninja Turtles, and Daniel Kon in Jurassic World Camp Cretaceous.

VECTOR’s past before he joined the U.S.S. was completely unknown. After joining the paramilitary unit, he was trained on Rockfort Island and became known for his martial arts prowess. VECTOR gained the attention of HUNK, a top operative of Umbrella, and the two had a fighting match that ended in a draw. Afterwards, HUNK served as a mentor to VECTOR throughout his training and he soon became one of Umbrella’s best, matched only by HUNK himself. He demonstrated himself to be a master of stealth and recon, which became his role in the new Delta Team of the U.S.S. alongside LUPO, SPECTRE, BERTHA, BELTWAY, and FOUR EYES. This squad was eventually known as the “Wolfpack.”

Eventually the Wolfpack was sent to aid HUNK’s U.S.S. Alpha Team in infiltrating a secret base beneath Raccoon City, which was where research on the G-Virus was being performed. Their objective was to retrieve a sample of virus from its creator, William Birkin, who had turned on Umbrella and planned to sell it to the US government. VECTOR was somewhat reluctant about the mission, due to the need to kill the facility guards, since they also worked for Umbrella. However, he was pleased to once again be working with HUNK as the two of them disliked working with operatives they saw as “subpar.” VECTOR’s team was able to complete their objective as did HUNK’s, but they were suddenly attacked by Birkin, now mutated by the G-Virus. Forced to flee from him and losing the sample in the process, HUNK ordered VECTOR and Wolfpack to evacuate while he stayed to get the sample back. However, the incident had dire consequences, as in the chaos, T-Virus was released, being spread throughout Raccoon City by rats. As the populace was overrun by the infected undead and the city consumed by chaos, U.S.S. knew that It needed to bury all evidence of any link Umbrella had to the disaster. VECTOR and the Wolfpack was sent in with the order to eliminate anything that might implicate Umbrella and reveal their illicit practices, including survivors who knew too much.

First, VECTOR and the Wolfpack headed to the city hall to destroy incriminating evidence and while there, ran into Nicholai Ginovaef, a member of the Umbrella Biohazard Countermeasure Service, who told them his squadmates had been killed. However, VECTOR and the others found security footage showing Nicholai leaving his team to die and realized he was a traitor. Shortly after destroying the evidence they’d been sent to get rid of, they were suddenly ambushed by Nicholai with VECTOR demanding answers for his actions. However, he just laughed and said they had served their purpose, as would the Wolfpack, before running for it. The room they were in suddenly burst into flames as Lickers swarmed the room, forcing Vector and the others to fight their way out of city hall.

Their next order was to take out a power grid to cut off all telecommunications in the city, as they couldn’t hunt down every single survivor in the city. With that, VECTOR and the others headed to the Raccoon City Hospital to obtain EMP devices to knock out the power grid. But upon arriving at the hospital, they were greeted over the intercom by Nicholai, who revealed he was working with a client of his own and couldn’t let them interfere. VECTOR and the Wolfpack fought through Nicholai’s traps, including zombies armed with bombs. However, upon arriving on the roof to meet the drop, Nicholai shot the chopper down and VECTOR and the others fled the hospital after the traitor set off bombs that set the building ablaze. They finally secured the EMPs, but were attacked by Nicholai yet again, sniping at them from a building while boasting that he’d been listening to their comms channel. VECTOR and the Wolfpack finally drove him off before command ordered them to get to the power plant. They headed to the Power Plant, fighting off infected, B.O.W.S. and US Spec Ops soldiers, before being attacked once more by Nicholai as they placed the EMPS on the generators.

They succeeded in knocking out the power grid and were then sent to get the Nemesis back under control. On its mission to hunt down the S.T.A.R.S. members, the B.O.W. had been damaged so it no longer responded to commands and VECTOR and the Wolfpack were tasked with obtaining an NE-a parasite, then injecting it into Nemesis to get it back under control. They headed to the nearby Dead Factory to get one and extracted the parasite from a failed T-103 Tyrant. However, VECTOR and the others suddenly found themselves under attack by the reawakened Tyrant, narrowly escaping the facility. They found Nemesis attacking Spec Ops soldiers and engaged it, managing to weaken it enough to inject the parasite back into it and get it back to its mission. VECTOR and the Wolfpack were then mobilized to the Raccoon City Police Department, ordered to destroy incriminating evidence on Umbrella compiled by Brian Irons, as well as eliminate any police officers left that might implicate Umbrella. They succeeded, but as the group moved out to meet their extraction, Leon S. Kennedy suddenly showed up and ran off.

VECTOR and the Wolfpack pursued Leon with command telling them to kill him. When they failed to succeed in doing so right away, command became nervous and abandoned the team, sending in Hunters and two T-103 Tyrants from drop pods to take care of it. Caught in the crossfire and attacked themselves, VECTOR and the others desperately sought out shelter and fought off the B.O.W.s as best they could. Finally, command contacted them and gave them one last chance, sending them to Birkin’s lab to hunt down the spies within, including Leon. VECTOR and the team entered the lab and came across Ada Wong, pursuing her into the lab and engaging more Spec Ops soldiers and B.O.W.s. However the facility’s self destruct protocol was engaged and the group hurried to the control room, seeing Ada apparently die at the hands of a T-103 tyrant before it was driven into a slag pit by Leon. Ordered to pursue Leon again, they went after him, but were forced to flee the facility as it descended into chaos and the self destruct went on. However, VECTOR and the Wolfpack were attacked by the tyrant in its mutated super tyrant form on the elevator. They managed to weaken it and force it off the elevator and make their escape, finally tracking Leon to the Raccoon City train yard, where he was with Claire Redfield, Sherry Birkin, and the remaining Spec Ops soldiers. VECTOR and the Wolfpack were ordered to kill Leon and secure Sherry for Umbrella. They managed to drive the surrounding zombies and B.O.Ws into a blood frenzy to overcome the Spec Ops barricade. VECTOR and the others then cornered Leon.

If the player chose to protect Leon, VECTOR and some of the Wolfpack members decided that they couldn’t count on Umbrella to keep their promises. Thus, they decided to keep Leon alive to use him as leverage, being forced to fight against their comrades who wanted to kill the cop right away. Succeeding, Vector told Umbrella they were re-negotiating as the company had left them for dead and at the mercy of their B.O.W.s. He demanded triple their payment and an evac chopper and when command refused, VECTOR replied that their contract with Umbrella was terminated. Command angrily told them they could die with Raccoon City, but VECTOR said they would take their chances. Leon asked why they spared him, Claire, and Sherry and VECTOR stated that they weren’t as strong leverage as the Wolfpack thought they were. It was time for them to return Umbrella for stabbing them in the back. VECTOR told them Leon, Claire, and Sherry could go and declared that once they got out of Raccoon City, they were going to bring Umbrella down.

If the player chose to kill Leon, VECTOR and the others decided to kill him in order to get Umbrella to give them evac. They took down the members of their team trying to defend Leon, before killing the cop. VECTOR and his squadmates subdued Claire and Sherry and command ordered them to bring Sherry to them. Claire begged for mercy but VECTOR coolly replied that they had orders, before shooting her in the head.

VECTOR is an extremely capable soldier, skilled with various firearms, as well as knife combat. He is particularly talented in martial arts thanks to his training with HUNK. On the Wolfpack, VECTOR is the reconnaissance agent and stealth specialist and he excels in the role, being extremely hard to detect and able to use his suit to render himself invisible for brief periods. VECTOR can also use his gear to make himself take on the appearance of an enemy. 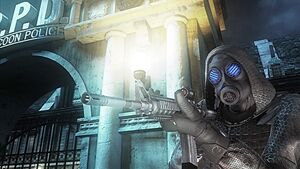 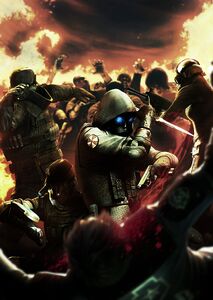 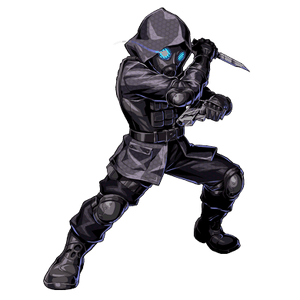 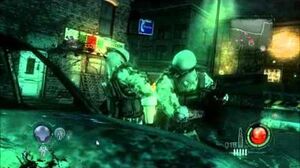