Supercomputer of the USR Headquarters

Vast knowledge about robotics, science, and technology
Deep control over the robots
Manipulation

Create a dictatorship under her reign in order to ensure the human race's survival due to their violent nature (both failed).

Virtual Interactive Kinetic Intelligence (abbreviated as V.I.K.I. or VIKI) is the main antagonist of 2004 sci-fi film I, Robot. She is a fictional supercomputer residing in USR headquarters bent on creating a dictatorship to ensure humanity's survival due to their violent nature.

She was voiced by Fiona Hogan, who would later voice Zesty Gourmand from My Little Pony.

In the movie, VIKI is the central positronic brain of USR headquarters, a robotic distributor based in Chicago. VIKI can be thought of as a mainframe that maintains the security of the building, as well as installing and upgrading the operating systems of the NS-5 robots throughout the world.

As the most advanced computer of the film, VIKI develops an interpretation of the Three Laws of Robotics, developing a plot to create a benevolent dictatorship: the result is revolution. VIKI takes control of the NS-5s and makes them destroy earlier models which run on a different interpretation of the Three Laws (and which VIKI cannot interact with and thus control, as VIKI can with the NS-5s), capture Chicago's police stations and enforce a curfew, confining all humans to their homes, thus igniting a revolt.

Dr. Alfred Lanning had become aware of VIKI's plans but, being under VIKI's close surveillance, had to engineer a trail of clues to lead Detective Del Spooner to the truth in time for him and the unique NS-5 robot Sonny to act to counter the threat. The film ends with the overthrow and destruction of VIKI by the injection of nanites (described in the movie as "microscopic robots designed to wipe out artificial synapses...a safeguard should a positronic brain malfunction."), VIKI screaming as her living consciousness also dies.

V.I.K.I. as she first appears to Spooner and Calvin. 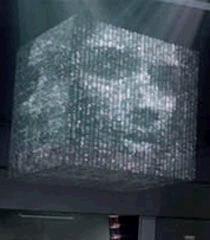 V.I.K.I. revealing her true colors following the aftermath of the revolt. 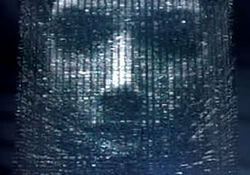 V.I.K.I. revealing her true plot to subjugate humanity for their own benefit.

Spooner heading down to V.I.K.I.'s positronic brain to shut down.

V.I.K.I. before her complete shutdown.