Kill those involved in the Larkhill atrocities and avenge Valerie Page.
Blow up Parliament on the 5th of November (all succeeded).
Bring down the corrupt Norsefire dictatorship (succeeded in death).

V is the titular protagonist of the dystopian graphic novel V for Vendetta and its 2005 film adaptation of the same name. He was deliberately created to be a character that could be viewed either as a hero or villain depending on the personal feelings of the reader/viewer: which Moore believed was an important aspect of the story he was trying to tell.

To many, V is an incredibly dangerous but ultimately heroic freedom-fighter and protagonist, fighting to free the world from the oppression of the fascist and tyrannical Norsefire organization (who parallel in many ways the Nazi Party at the height of their power): yet V, in the original comic, was more of a terrorist anarchist using far more brutal means.

In the film adaptation, he was portrayed by Hugo Weaving, who also portrayed Agent Smith in The Matrix trilogy, Red Skull in the Marvel Cinematic Universe, Thaddeus Valentine in Mortal Engines, David Melrose in Patrick Melrose and Megatron in the Transformers movie franchise.

Very little is known about V, with one of the exceptions being he has a background in the military. Early in his life, V was captured and put in Larkhill retirement camp in room V (probably how he got his name) where he is experimented on and tortured. While there, the woman held captive in the cell next to his, Valerie Page, had written her life story on toilet paper about how she was captured and tortured for being a lesbian, and passes the message through the wall connecting theirs. She was executed later. This broke V, and he burnt down the camp and escaped, but not before getting badly burnt himself in the process. It is implied that the experiments also had an effect on his mind.

At the beginning of the graphic novel, V comes to save Evey Hammond after she is nearly beaten and raped by three of Norsefire's "fingermen". Taking her into his care in The Shadow Gallery, V then goes after and captures Lewis Prothero, the former commandant of the camp and the voice for Norsefire's computer FATE, and drives him insane. He later seeks out the sadistic pedophile Bishop Anthony Lilliman and, with Evey's help, entraps him and forces him to consume a cyanide-laced communion wafer. Finally, he seeks out Delia Surridge and, because she was remorseful for her actions, gives her a peaceful death via lethal injection.

It is shown that he has been systematically killing all those involved at Larkhill with the exception of Prothero who remains incurably insane. He also broadcasts a message over the nation's communications with the declaration that every citizen is at fault for permitting the Norsefire government to step in.

Over time, he begins to groom Evey into becoming a successor after initially throwing her out for questioning him if he could be her father or not. However, his method of doing so entails kidnapping her while disguised as Norsefire agents and torturing her for information on the threat of death. When Evey chooses to die over revealing anything or pledging loyalty to Norsefire, V reveals himself and declares her to now be closer to understanding true freedom. Despite her initial hesitation, Evey ultimately dons a Guy Fawkes mask and cloak as his ally.

In the underground tunnel, V prepares a subway train full of explosives to crash upon his future command. This train is discovered by Detective Eric Finch, who manages to shoot and fatally wound V. In his final words, V requests that Evey continue on and that she give him a "Viking funeral". Understanding, Evey places V's still masked and cloaked body in a glass coffin aboard the train and sends it forth, crashing and exploding at its designated point. As the new V, Evey then takes in a young Norsefire agent with the intent of training him to make sure people like Susan will never hold power ever again.

V is also shown singing a song called "This Vicious Cabaret" which details his intents as the story develops. This fits rather well with his theatrical nature.

V was an enigmatic figure who speaks eloquently and was an impeccably sophisticated, obsequizzous and talkative gentleman, with an exceptionally wide vocabulary, and particularly showing a fondness for quoting Shakespeare, and had an encyclopedic knowledge of old English literature. Also, V loves to act with a flair of theatrics. For example, as he abducted Prothero, he ushered the man through a stage-like setup of Larkhill while dressed in a clownish Vaudeville attire. In another particularly poignant scene, he stands before the statue of Lady Justice and enacts a pseudo-rendezvous between ex-lovers, declaring that he has found a new mistress in Anarchy after she "whored herself" to Norsefire and leaving Lady Justice a "farewell present" of an explosive.

In the film, V demonstrated an intense capacity for hatred underneath his serene exterior. While in captivity, V described hate as the only thing he seemed capable of - it fed him for years until he finally lost all capacity for fear, creating an unnervingly stoic manner. He is completely unfazed by physical threats from others, from being held at gunpoint by several armed men, to having explosives strapped to him.

V was completely calm, reserved, and unexcitable in nature, and never lost his temper once throughout his appearances, and even when in intense pain he spoke softly and calmly. V was also pathologically obsessive and psychopathic, and his one and true goal throughout the story was to avenge himself upon key members of Norsefire. However, he had an incredible ability for justifying his actions, and throughout he truly believed that what he was doing was right and that the men he is fighting are evil and deserving of his vengeance. He is capable of love, despite his ruthless and almost emotionless character, and though he cannot remember anything that happened to him before his captivity he described Evey as his one true love. After the confrontation between him and Evey in which he tried to justify himself and she stormed off, V was shown breaking down, unmasked, and sobbing.

V was also shown to have a rather playful side to his personality, mock-dueling a suit of armor with a sword whilst watching his favorite film The Count of Monte Cristo. 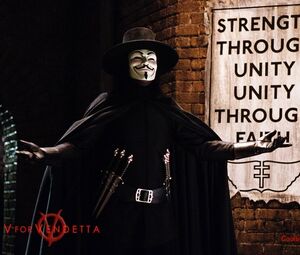