Member of the Franchise

Finish her deal with the Franchise.

Contradictory Femme Fatale
Vaana Keylyn is a major antagonist in Hitman: Blood Money, serving as the secondary antagonist in A Dance with the Devil mission and a member of the Franchise.

She was voiced by Barbara Bernad.

Vaana Ketlyn was a famous Romanian circus performer and party hostess around Nevada, having become a self-made millionaire. She was also secretly an illegal arms dealer in league with her lover, CIA agent Anthony Martinez, both of them being associated with the Franchise.

Diana's dossier on Ketlyn states that she is an adept Eskrima-style sword fighter, and in fact she carries a cane sword throughout the level, and will use it against Agent 47 if she gets the chance.

During a lavish and decadent Heaven and Hell themed party being hosted at her skyscraper corporate offices, Keylyn was assassinated by Agent 47 on August 15th 2005, alongside her lover and two assassins from the Franchise, who aimed for killing 47 himself. 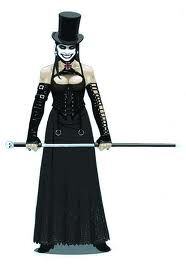 Retrieved from "https://villains.fandom.com/wiki/Vaana_Ketlyn?oldid=4198448"
Community content is available under CC-BY-SA unless otherwise noted.