The Lunatic
The Jester of Rook Island

Killing the Rakyat and civilians.

Eliminate every Raykat in his way, including his sister Citra.

Kill Jason Brody as well (both failed, though he succeeded in killing off two of Jason's friends).
Deal weapons to Juan for libertad (succeeded).

Vaas Montenegro is the central antagonist of the 2012 first-person-shooter video game Far Cry 3, returning in the post-credits scene of Far Cry 6, and is the titular protagonist of the DLC Vaas: Insanity.

He is the leader of the pirates on Rook Island and the brother of the Rakyat leader Citra. As part of a major running theme in the game, Vaas and all of the other villains are mentally unstable. Vaas is also known to be a charismatic but psychotic man at the same time. He is also responsible for kidnapping the young adults who came to Rook Island and torturing them as well as Jason Brody's archenemy.

He was voiced by Michael Mando (who also played Nacho Varga in Better Call Saul and Mac Gargan in Spider-Man: Homecoming), and Richie Lawrence young.

Vaas was born in 1984 on the Rook Islands and, since a young age, when he was a child, he was a member of the native Rakyat. He was particularly close to his sister Citra and mentions that his first kill was for her.

Sometime before 2012, Vaas became addicted to drugs, brought to the islands by deranged slave and drug trafficker Hoyt Volker. Vaas eventually established contact with Volker who found potential in Vaas and promoted him to right-hand man. Vaas went on to become the leader of the Pirates, a faction consisting of pirates that came to the Rook Islands to rape, pillage, steal, and murder.

Vaas and his men would help Volker with his business (such as growing marijuana fields and kidnapping and selling into slavery people who land in the North Island) and strike terror and injustice in the Rakyat and the islands that are rightfully theirs. Vaas would operate from a hidden fortress in the North Island from where he would oversee the deaths and destruction he caused on the natives and the Rakyat who were once considered his family.

During Jason's and his friend’s trip in Bangkok, they hear about an island where you "can do anything" from Doug, the nightclub DJ that works as a spotter for Vaas. They then decided to do a blind skydive over the Rook Islands. After landing, they are soon captured by Vaas and his Pirates. While Jason and his older brother Grant are tied up, Vaas explains how he is going to ransom them for large amounts of money from their parents. It is revealed later that even after receiving the ransom money, Vaas would sell them all as slaves for increased profit.

After Jason and Grant escape and brew up an escape plan for everyone, Vaas shoots Grant in the neck, the latter of whom bleeds to death. Vaas decides that instead of killing Jason, he lets him run, with the clear intent to hunt him down for sport. This would later be his undoing as Jason managed to escape.

While on his campaign to save his friends, Jason learns that Vaas is keeping Liza Snow hostage personally, as a way to make Jason come to him. When Jason assaults a slave prison that is said to hold Liza, he is knocked out and captured by Vaas. When he wakes, he, Liza, and Oliver are tied up in chairs in an old abandoned hotel, while Vaas is pouring and covering them in gasoline. He then sets fire to the building and leaves Jason and Liza to die, but he takes Oliver with him. They escape just as the building is engulfed in flames and collapses on itself.

Jason continues his campaign of saving his friends. During a meeting with CIA agent Willis Huntley, Huntley puts on a recording of a conversation between Vaas and Hoyt in which Hoyt briefly chastises Vaas for not taking matters seriously with Jason and urges him to take care of him while he searches Beras Town for transportation manifest that holds the name of Oliver Carswell, who happens to be one of Jason's kidnapped friends.

After being given a mission by Citra to save some of her kidnapped warriors, Jason and some Rakyat members ambush Hoyt's men who are transporting Citra's warriors. However, Jason is ambushed by Vaas again, when opening a truck that he believed to house the captured warriors. Vaas then ties Jason to a cinder block and introduces him to his insanity monologue before kicking him into a cenote, intending to drown him.

Jason escapes, then proceeds to kill more of Vaas’ men to acquire a helicopter and escape. After the helicopter is shot down by an RPG, Vaas comes up to Jason and shoots him point-blank in the chest. It is later shown that Jason survived the shot by way of a lighter, the same one Vaas tried to light him and Liza on fire within the abandoned hotel.

After becoming intimate with Citra in her temple, Jason is finally given the task to kill Vaas at his compound, who is throwing a party in celebration of Jason’s "death". Jason is led to believe that he is infiltrating the compound successfully, but is surprised when Vaas sounds the alarm and broadcasts that he knew Jason was coming. After killing all of the pirates, Jason stumbles into a larger warehouse looking to confront and kill Vaas once and for all.

When he confronts Vaas, Vaas stabs Jason in the chest and then seemingly walks away. Jason enters a similar dreamy state in which he confronted Buck and kills several visions of Vaas, before finally confronting the true Vaas. After some struggle, Jason plunges his knife into Vaas' chest again and again until Vaas falls to the ground wounded. In the last scene, when Jason collapses next to Vaas after the long fight, Vaas’ eyes look straight into Jason’s one more time before Jason wakes up.

As Jason approaches Citra in the final dream sequence, Vaas, or at least a voice in Jason's head that sounds like him, says that she's going to make him a warrior.

Vaas is featured in The Far Cry Experience, a web-series promoting the game, where he somewhat humorously tortures famous actor Christopher Mintz-Plasse who is filming a reality show/documentary. He is played in live-action by his voice actor Michael Mando.

Vaas, along with Pagan and Joseph, appear as playable characters in the Season Pass of Far Cry 6.

Following his death by Jason, Vaas awakens in a hallucination, where Citra tasks him with becoming her warrior by collecting three pieces of the broken Silver Dragon blade. Despite not caring for becoming her warrior, he agrees to do so as she states that collecting the pieces will allow him to escape his mind. During his pursuit, Vaas comes across numerous enemies, including Jason, corrupted Rakyat, and his sister. When returning with the blade, Citra breaks it and demands that he fight countless waves to prove that he is her warrior, but he defeats them. Vaas then leaves his hallucination despite Citra's pleads, realizing that she was a negative influence on his life.

In a post credit sequence, an older Vaas appears on a beach speaking with a tennis ball, explaining what he would say if he could speak to God. Though it's thought to still be somehow alive and his smuggling weapons to Juan to fuel the liber tad revolution in Yara, it's left ambiguous if he survived.

What is known about Vaas' personality comes from his close (and dangerous) encounters with the main protagonists. Close observation shows that he is an extremely, reckless, violent, sadistic, brutal, loathsome, unpredictable, cynical, traitorous, Machiavellian, psychopathic, clinically insane, prideful, oppressive, and remorseless pirate lord with a dark sense of humor in killing anyone who looks at him the wrong way and a frighteningly obstreperous personality who is feared even by his own men, some of whom are as chaotic and mentally unstable as Vaas.

Despite being more crazier and mentally unstable than the other antagonists, he was the charismatic and masculine leader and provided most of the jokes in the Far Cry Experience which saw the torture of Christopher Mintz-Plasse and his cameraman at the hands of Vaas. However one can notice that once Christopher is not moving for the last time he begins to attempt a resuscitate Chris, after failing however he begins to mourn him just before a fellow pirate announces Jason's arrival, he then humorously begins to bury him in the sand. This marks one of the few (if any) times in which he shows remorse towards one of his victims. 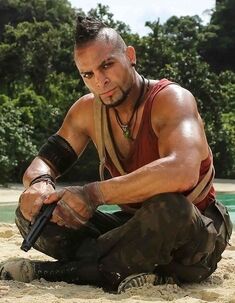 Vass in The Far Cry Experience. 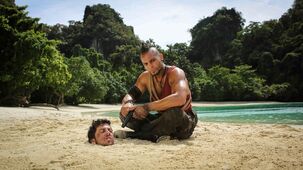 Vass on the beach with Christopher Mintz-Plasse's head. 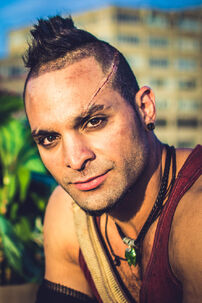 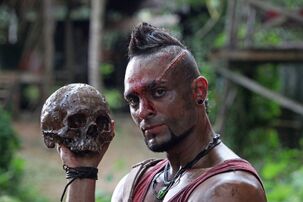 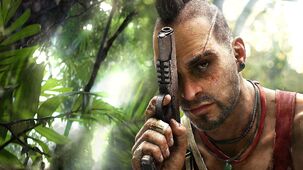 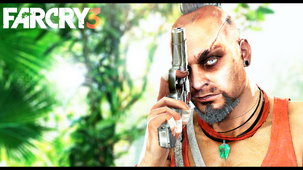 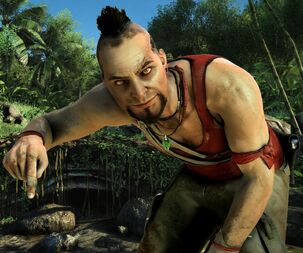 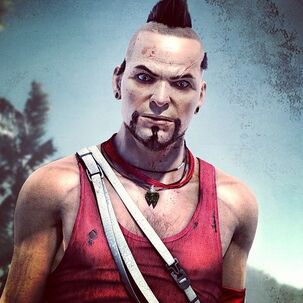 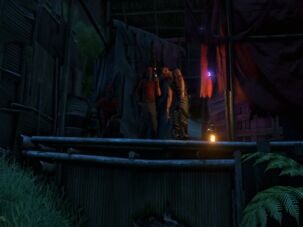 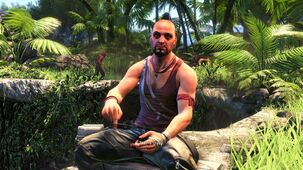 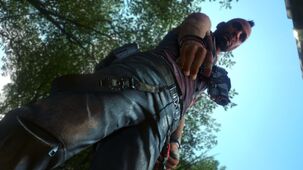 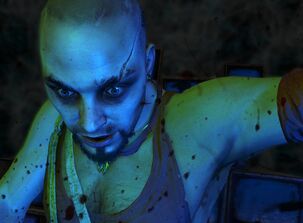 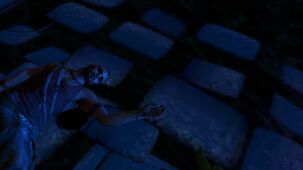 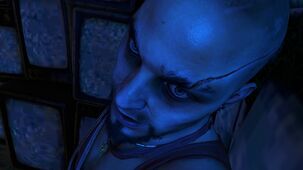 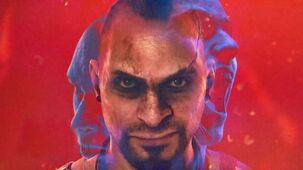 Vaas in the DLC - Vaas: Insanity.

Vaas in the secret ending.