He was once a Minish boy who was a pupil of the respected Minish sage Ezlo, however Vaati grew obsessed with the evil he saw in humanity and as a result betrayed and cursed his master during his own quest for power, transforming himself into a dangerous and powerful mage in the process.

This biography of Vaati is organized into the latest "official Zelda timeline", this may change completely in the future as the timeline given is merely meant as an example, and there have been official timelines before it.

The Unified Timeline refers to events before the split in The Legend of Zelda: Ocarina of Time and thus occurs in every timeline, the split happens in the final battle with Ganon.

The Legend of Zelda: The Minish Cap

The origin tale of Vaati is told in the adventures that Link faced with the Minish Cap. Originally of the Minish race, Vaati was fascinated by the evil that could come from the heart of man. When his master, Ezlo, fashioned a powerful magical cap as a gift for the humans - one that could make one's wishes come true - Vaati stole the cap, transformed into a sorcerer and cursed his master into the shape of a living cap so that he would not stop him. Then, taking human form, Vaati set out to find the means to allow him to become the greatest sorcerer the world had ever seen.

He found that means in the legends of the Light Force, a mystical magic said to bestow upon the wielder the powers of godhood. Over the course of the game, Vaati continuously sought its location, finding it, in the end, in the unlikeliest of places - within Princess Zelda. Vaati managed to extract some of the Light Force from Zelda and transformed into a tall sorcerer form known as Vaati Reborn. Link defeated the form with the power of the Four Sword and Vaati transformed into a demonic, one-eyed black orb known as Vaati Transfigured, but was vanquished again. In his anger, Vaati transformed yet again, into a larger, more powerful version of this form known as Vaati's Wrath, but even this could not defeat Link, who sealed Vaati within the Four Sword. Zelda then proceeded to use the magical cap to restore what Vaati had done, destroying the cap in the process.

In the game, Vaati is seen in a total of five forms; a Minish, a human, a demonic sorcerer, a wind mage, and a true demon form.

Vaati managed to break out of his seal and attacked the land of Hyrule once again. Here, he kidnapped maidens and took them to his Palace of Winds until Link rose up again and defeated him, sealing him inside the Four Sword again.

The Legend of Zelda: Four Swords

The seal on Vaati was apparently weakened over time, and a long time later Vaati managed to break out of his prison within the Four Sword. Vaati kidnapped Princess Zelda, taking her to his palace to make her his bride, forcing four Links to go off and search for the princess. After traveling over three different lands and the dungeons they contained, Link and his three other selves confronted the wind mage in the Wind Palace, the seat of Vaati's power. After an arduous battle between the sorcerer and the heroes, Link was able to reseal Vaati into the Four Swords blade.

Vaati has two forms in this game. The first is Vaati possessing a statue of himself, encased in armor, similar to the Vaati's Transformation form from later in The Minish Cap. In the second form, he appears as he does in the opening cutscene, and the battle is very much like the battle against Cyclok in the later Phantom Hourglass.

This is the timeline where Link was sent back to the past and was able to warn the Royal Family of Ganondorf's treachery, leading to the events of the backstory of The Legend of Zelda: Twilight Princess.

After Link had rescued Zelda and sealed Vaati in The Legend of Zelda: Four Swords, Hyrule was at peace for a time. This changed when Ganondorf stole the Dark Mirror from the Temple of Darkness. Creating Shadow Link to kidnap Zelda and the Shrine Maidens, Ganondorf tricked Link into releasing the Four Sword, unsealing Vaati in the process.

During his adventure to save Hyrule, Link found out that Vaati was not the real enemy. Instead, Ganondorf had instigated the ordeal with Vaati to distract Link, allowing Ganondorf the time needed to steal the power of the Hylian Shrine Maidens.

Vaati never makes any appearances, as he is sealed in the Four Sword located in the sunken Hyrule. When the flood of the Great Sea erases Hyrule after Ganondorf's defeat, Vaati and the Four Sword are erased along with it.

The Four Sword is unsealed in the Game Boy Advance version of The Legend of Zelda: A Link to the Past, but Vaati does not make any appearance, suggesting that over time Vaati might have decayed into nothingness inside the Four Sword.

Vaati appears as a primary grab-type spirit in Super Smash Bros. Ultimate. His spirit battle is against Ridley on the Hyrule Castle stage equipped with an Ore Club, with heavy winds in effect. 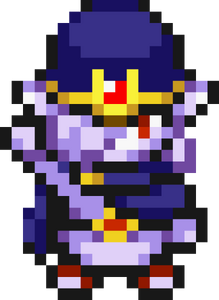 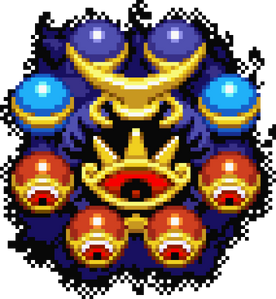 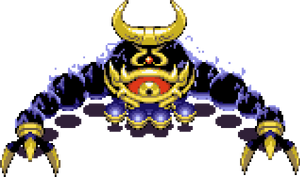 Vaati in The Legend of Zelda: Four Swords Adventures. 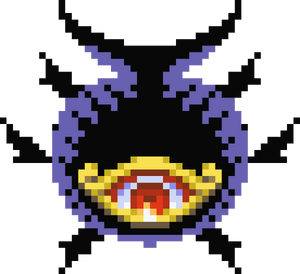 Vaati in The Legend of Zelda: Four Swords. 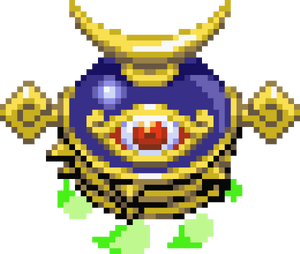