Summoning objects with a blow of his lips

Vademon is a minor villain in Digimon Adventures 01.

﻿Vademon is an Ultimate Class Digimon that looks like an alien. He's tall and extremely skinny. His lower half is like an octopus and has a giant brain wth wires inside the brain. He often carries a gun in his hand as well.

When Izzy and Tentomon were finding the other Digidestined, they fell into Vademon's pocket dimension due to a trick by DemiDevimon. Vademon convinced Izzy to give up his curiosity by telling him that his "greed for knowledge" would cause him to go to hell, over the protests of Tentomon. Vademon intended to sell Izzy's curiosity at his pawnshop, and DemiDevimon asked him to sell him Izzy's crest. Vademon said he'd trade it for some of his curiosity. He obtained Izzy's crest, but DemiDevimon was unable to give him his curiosity, resulting in a fight between the two.

In the meantime, Tentomon, after de-digivolving to Pabumon, convinced Izzy to get his curiosity back, and recovered it for him in the middle of Vademon and DemiDevimon's fight. The two evil Digimon chased after them, and Tentomon digivolved to Kabuterimon to fight Vademon, who sent meteors flying at him. Then Kabuterimon digivolved to MegaKabuterimon for the first time. Vademon sent a planet after him, but MegaKabuterimon blew it up with his Horn Blaster attack, defeating Vademon and collapsing his pocket dimension.

Several Vademon serve as Millenniummon’s followers. Their goal is to resurrect Millenniummon. When AxeKnightmon was defeated by WarGreymon, the ritual was destroyed, canceling the resurrection. The Vademon decide to wait for the next resurrection.

Vademon is an Alien Digimon whose name is derived from "Invader". It is shaped like something that came fromthe far reaches of the cosmos, but it's rumored that it was born from the seed of a plant. It is specifically unimaginable from its enormously developed head and octopus-like lower body, but it carries terrifying offensive power. 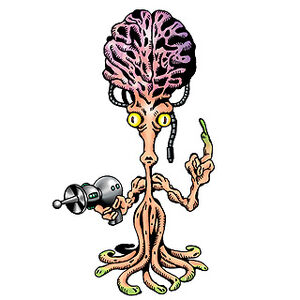 Retrieved from "https://villains.fandom.com/wiki/Vademon?oldid=4169933"
Community content is available under CC-BY-SA unless otherwise noted.