Enforcing the laws in Metru Nui

track down and capture the Toa Metru (failed)

Vahki are an antagonistic species appearing in the Bionicle series, serving as major antagonists in the 2004 storyline. They are purely mechanical robots designed to serve Turaga Dume and enforce the laws in Metru Nui, after the failure of the Kralhi.

There were six main types of Vahki, each of which were assigned to a specific Metru.

There were also two specialized Vahki models that were called in when the standard Vahki couldn't handle a problem. One was the Kraahu, a robot capable of splitting into pieces and spraying a stun gas. The other was the Kranua, a powerful and bulky robot that had the ability to dissolve into grains of sand.

Each Vahki had their own Staffs of Power that either made a Matoran more willing to work or less able to cause disorder.

Vahki could also shift to a four-legged walking mode or an aerodynamic mode for flight.

Vahki were originally designed by the Onu-Matoran Nuparu after the failure of the Kralhi. The parts for the Vahki would be forged in Ta-Metru, and then sent to Po-Metru for assembly. It is believed that around 5,000 Vahki were created. For many years, the Vahki worked to mantain order and protect the city from any outside threats.

When Makuta Teridax was impersonating Turaga Dume, he ordered them to ignore the two Dark Hunters Nidhiki and Krekka and instead go after the newly created Toa Metru. As the Toa Metru searched for the six Great Disks, the Vahki tried to apprehend them, but to no avail. When the Toa Metru brought the six Great Disks to the Collisseum, "Turaga Dume" denounced them as traitors and sicced the Vahki on them. Vakama, Nokama, and Matau managed to escape, while Nuju, Whenua, and Onewa were captured. While the former three were on the run, Teridax ordered the Vahki to bring all the Matoran to the Collisseum. However despite this the Vahki were not truly evil as it is in their programming to capture wanted suspects in Metru Nui and were lead to believe that the Toa Metru were a threat.

When Teridax absorbed the power from the Collisseum, he destroyed some of the Vahki in the process. Those that remained had their programming warped. The Vahki were now able to speak in Matoran language, and they believed that to mantain order in Metru Nui, they should wipe out all living beings in the city. However, the Vahki were quickly overrun and destroyed by the Visorak. 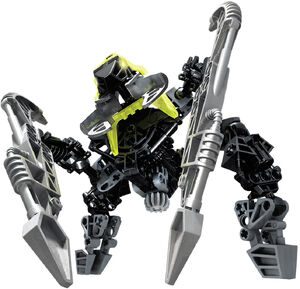