Turn of the 21st century

The Devil's Coat Tails (The Facemaker)
The Crush (Doc Buzzsaw)

Vahzilok is both a mad-doctor in the M.M.O. City of Heroes, and an organization named after him, whom follow Dr. Vahzilok's depraved medical methods. Dr. Vahzilok revolutionized medical techniques with his knowledge of the human and meta-human nervous-system, but went far as reactivating it after it had cease, creating man-made zombies. The Vahzilok believe further experimentation with this method will usher in some of the most prolific scientific advancements in history along with eventually true immortality.

Demetrios Vasilikos was a medical doctor in Paragon City. He followed in the footsteps of his father and upon graduating medical school was invited to work with his father, Demetrios specializing in surgery. While treating a meta-human hero named Commander Commit, Dr. Vasilikos Sr. contracted an alien infection from his patient - after months subject to the painful wasting disease, Dr. Vasilikos senior died. Demetrios spent those months searching for any possible way to save his father - by the time his father had died he had been studying medical fringe techniques. Demetrios did not stop his studies just because his father died, though he mourned his father his mind was still hungry for ways to fight death. He went as far as to study the occult, but ever the man of science, he refused to succumb to what he saw as superstition, rather he attempted to do with science what witch-doctors and shamans claimed they could do with magic. Combining stimulants talked about by new-age magicians discussing necromancy with his intimate knowledge of the nervous-system, Dr. Vasilikos created a technique to reanimate the dead.

As his pioneering techniques continued Doctor Vasilikos became a master of literally stitching together various dead-body parts to work as a single nervous-system. He created new bodies from various old bodies and made them ambulatory. The heroine War Witch would be the first to discover the doctor had gone mad and was stealing corpses to use as make-shift zombies, which in-turn gathered more dead bodies to continue the research. By then Vasilikos had changed his name to "Vahzilok" as an alias to make business deals without immediately being I.D.ed through his medical license and the name stuck once he was outed as a grave-robber, among other things. In the tie-in-comics War Witch encounters a wealthy businessman named Mr. Stone, who had sponsored Vahzilok's research in thanks for curing his cancer, following Mr. Stone back to Vahzilok would give War Witch and her friends, Apex and Sphinx, a supprise as Dr. Vahzilok climbed into a giant meat-suit made of massive corpse parts. Though Vahzilok would be arrested along with Mr. Stone, the good doctor would escape jail. After escaping jail Dr. Vahzilok received seed-money to continue his research from a Mysterious Benefactor. With his Mysterious Benefactor's investment to establish a secret under-ground lab, Vahzilok reused the same method he had with Mr. Stone of selling his services to sick plutocrats for funding to continue his research.

Demented though he was, Dr. Vahzilok had fundamentally changed the face of medicine and though medical authorities would denounce him, many surgeons and aspiring doctors willing to work outside official medical practices flocked to him; The Disciples of Vahzilok were formed. Vahzilok are trained doctors who apply Dr. Vasilikos's techniques to their practice. In addition to high-end surgery, they have knowledge of how to reanimate the dead, and modify the dead. Some go as far as to keep the living alive and transplant their brains into modified pseudo-undead bodies called Eidolons. Eidolons are physically dead, but mentally alive and the synergy between the two allows them, in-addition to being damage resistant, to use ectoplasm as an extension of themselves, with their disconnect from a traditional body. Most of the Vahzilok is actually made up of corpses. Dr. Vahzilok has stitched them together to modify them but in addition believes the families of the deceased should not be made to see the faces of their departed loved ones in his army of the dead, and so has insisted in creating new faces/bodies by stitching them together as new "life forms" distinctly different from the people they once were - this is also the reason Eidolons are covered from head-to-toe in leather, eyes are no longer needed in this state and he would just as soon spare some poor widow seeing her dead husband's body being controlled by a new brain.

Though many Vahzilok disciples follow their name-sake's lead as medical doctors looking to literally fight death others do so for profit. The Facemaker is a wealthy elderly woman who invested in Vahzilok til she was faced with death, and then asked to be modified passed the point of mortality. It is unclear how old she is now, and she claims age does not matter anymore. The Facemaker sees her new-self as nothing more than "having had a little work done" and in this state she continues to run a Vahzilok-based business. The Facemaker, as the name implies, is something of a plastic surgeon in The Rogue Isles, except with said faces clearly preexisting ones. The Facemaker sends her people out to harvest corpses for body parts to modify her customers. It is understood amoung Facemaker's surgeons if they can not find a corpse to strip, they are to make corpses for the process. The Facemaker, while a true believer in Dr. Vahzilok's statement their work will eventually cure death, is far more concerned with making profit off the techniques in the interim.

The Facemaker's best surgeon - Doc Buzzsaw, eventually out-grew working under The Facemaker. Though it was an amicable departure and she still keeps in touch with her old boss, now Doc Buzzsaw has been indoctrinated into the beliefs of their founder, and is more concerned with advancing medicine than anything else. Even with her dedication to science as a concept she was rejected by Dr. Vahzilok as a personal aid, due to her lack of scruples. She is not under Dr. Vahzilok disillusions of altruism, nor does she prioritize making a profit like The Facemaner, Doc Buzzsaw looks solely at the big-picture, where advancing the Vahzilok's techniques to their logical end-point will advance science into areas most had previously never even dreamed of. Doc Buzzsaw makes most of the money for her experiments modifying the gang of hedonistic cyborgs known as The Freakshow, who became addicted to body-modification and pay for their fix through larceny. Doc Buzzsaw is the bridging element between the Vahzilok and Freakshow and the reason why several Vahzilok surgeons show-up in the Freakshow gang, as the gang's specialized medics. 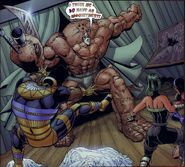 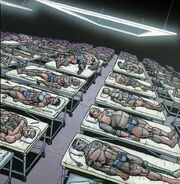 Vahzilok corpses awaken
Add a photo to this gallery
Retrieved from "https://villains.fandom.com/wiki/Vahzilok?oldid=3153998"
Community content is available under CC-BY-SA unless otherwise noted.