Convince Renamon to come with him to the Digital World

Vajramon is an Exalted Beast Digimon whose name is derived from the mythological Vajra. It is the "Ox" Deva, and serves the Sovereign Ebonwumon. As a follower of Ebonwumon, it is a seeker of truth who is aiming for detachment from material and emotional concerns. Its warrior-like personality values honor, and loathes cowardice and effeminateness. With the most well-honed physical strength among the Deva, it can easily wield its giant "Treasure Sword" that it carries on its waist. He serves as one of the minor villains in Digimon Tamers.

Vajramon is an Ultimate Level Digimon that resembles a centaur-bull. He wears red battle armor, and carries two swords.

Vajramon appeared in Digimon Tamers. Unlike other profiles, he served Zhuqiaomon like the other Devas. He and Pajiramon are the fourth and fifth Devas to appear, and he is the fifth to be destroyed.

Vajramon appeared with Pajiramon in the Real World, where they began to eat electrical appliances to stabilize themselves after the Bio-Emerge. As Gargomon battled Pajiramon, Renamon engaged with Vajramon. Both were evenly matched and Vajramon was impressed with Renamon's strength to the point and developed a crush on her, though Renamon called him "pig" before they actually began to fight.

Vajramon, unlike Pajiramon, enjoyed fighting his opponent to the point as if it were simply a game as he deflected Renamon's Diamond Storm attack. He was later seemingly destroyed by Rapidmon alongside of Pajiramon, but mysteriously revived himself. He then attempted to talk with Renamon to get her join the Deva, unaware that she only wanted to get more information on them and their master. The theme of his attraction to her was continued as he commented on how elegantly he thought she moved (and when later he said that she was so beautiful but so naive). When she refused later on a baseball field, she fought Vajramon until Rika, Takato, Growlmon, Henry, and Gargomon appeared.

Vajramon overwhelmed Growlmon, and Gargomon easily. However, Vajramon was reluctant to fight Kyubimon, attempting to reason with her until he saw he has to make her understand with brute force. By that time, Rika got a Blue Card resulting in Kyubimon Digivolving to Taomon. Vajramon had been enamoured with Renamon and Kyubimon because of their animalistic appearance, but was slightly put off by Taomon for looking "so human" and that his master would not approve. Taomon revealed to Vajramon that she used him to get the info she required. Feeling betrayed, Vajramon was bent on killing Taomon, only to die by her power after slapping his swords with her sleeves and deleting him with her Talisman of Light attack, with little or no effort on her part, thus destroying him for good.

An Ultimate Digimon that looks like an Ox and is one of the "Deva Digimon". A subordinate of the Four Holy Beasts member Ebonwumon, he aims to become enlightend both physically and mentally. He respects justice like a samurai, and dislikes unfair events and effeminate traits. He is the most highly trained and authoritative Deva in terms of physical strength, easily wields his giant twin Bǎo Jiàn swords. His special attack is "Rodha", which flings his Bǎo Jiàn into the ground using both his forefeet and the upper half of his body, and creates a rift 50 meters in front of him. Rocks will fly during this attack because of the shockwave that appears from the earth, causing additional damage to anyone around him. (Wildermon)

Vajramon is skilled at swordsmanship. He has tough armor that not even a Champion level Digimon attack can even damage his armor. 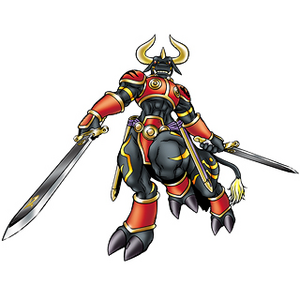