Villains Wiki
Register
Don't have an account?
Sign In
Advertisement
in: Fallen Heroes, Friend of a Hero, Minion,
and 37 more
English

Leader of the Toa Metru/Hordika

Commander of the Visorak Horde (formerly)

Assist the Visorak Horde of taking over Metru Nui (formerly).

Prove he is a good leader and become stronger than anyone else (abandoned).
Capture or kill the other Toa Hordika. (failed)

Vakama is one of the major protagonists in the BIONICLE series. Although he was one of the protagonists of the series, he became the minor antagonist in the 2005 storyline during the Visorak invasion of Metru Nui.

He was formerly the leader of the Toa Metru/Hordika but abandoned his friends and allied himself with the Visorak after his Rahi side have taken over him.

He was voiced by Alessandro Juliani in the animated series in both of his forms.

Having saved a small batch of Matoran after Teridax began the Great Cataclysm, Vakama lead his team of Toa back into Metru Nui in order to rescue the remaining Matoran on the island. They were ultimately captured and bound in cocoons by the Visorak, which had invaded the city in their absence. After being poisoned, he and the other Toa mutated into Toa Hordika, and were cut from their cocoons and dropped from the Colosseum's tower under the orders of Sidorak (with advice from his viceroy, Roodaka). They were fortunately saved by the Rahaga and taken to Teridax's former lair. Vakama found the mutation was another failure to him, having just been captured and barely escaped. These burdens piled on him, and combined with the Hordika venom made him arrogant and quick to anger. He left the group in an effort to rescue the Matoran himself, but was captured by the Visorak and brought to Roodaka.

After being captured by Roodaka, Vakama asked her why he was brought to Roodaka's lair. She told Vakama that his subsiding primal self could have turned him into either a friend to Roodaka or remain a foe. She also told him that she knew of Vakama's problem of the other Toa not treating him like a "true" leader. Roodaka told him that the reason the Visorak are loyal is due to the fact that they are afraid of facing either Roodaka, or Sidorak's wrath (though Roodaka thought Sidorak was weak). She showed Vakama Ta-Metru, his old home and told him that he could rule it as he saw fit under the condition he lead the Visorak horde.

Vakama became convinced by Roodaka and was ordered to capture the Rahaga and bring them to Sidorak. In the Web of Shadows movie, his eyes changed to green with a slit-shaped pupil when he turned evil, despite the fact that his eyes were already green both as a Toa Metru and a Toa Hordika. This change is not considered canon.

Vakama headed to the great temple and captured the Rahaga (except Norik as he was meant to pass on a "message"). He then returned to the Coliseum to present the Rahaga to Sidorak, however as he had no knowledge of Vakama switching sides, he planned to exterminate Vakama but reconsidered as Vakama showed Sidorak the captured Rahaga and said that his prisoners would prove his worth to Sidorak. Sidorak then made Vakama leader of the Visorak horde after being convinced by Roodaka. Sidorak later states that he and Vakama had a lot in common (which Vakama did not take as a compliment until Sidorak told him).

Vakama, along with Sidorak and Roodaka were waiting for the other Toa Hordika to arrive when they were somewhat caught by surprise when Keetongu, once thought to be a myth, arrived. Vakama threatened the other Toa Hordika that they would be captured by force unless they were to bow to him (and Sidorak, after Sidorak reminds Vakama that the latter was still serving him). Having been denied, Vakama unleashed the Visorak. The Toa Hordika launched their Rhotuka and used their signature tools to grab onto them, getting to higher ground. However, Matau kept going and went to the observation tower to try and save Vakama. Matau reached Vakama and the two began to fight. During the struggle Matau tried to remind him that his strength came from his unity with the other Toa, and reminded him of his duty; rescuing the Matoran. He finally realised the error of his ways, and his eyes returned to the old bright red after Matau apologized to Vakama after what he criticized him for.

Vakama then hatched a plan to pretend to conform to Roodaka and 'capture' Matau to cause her to let down her guard. He then used his new position as the commander of the Visorak Horde to his advantage by ordering the Visorak to disband, which they did after realizing Roodaka's treacherous nature. The defenseless Roodaka was then cornered by the Toa Hordika led by Vakama, with them firing their Rhotuka spinners to kill her. Norik realized in the aftermath that by doing so, the Toa Hordika had just accidentally allowed Teridax to escape the seal they had made, to which Vakama replied "For some reason, he doesn't scare me anymore". He then asked for Keetongu to restore them to their old Toa forms.

Vakama's Hordika transformation made him arrogant and quick to anger. This was shown when Norik warned him of the potential dangers that came with the transformations, Vakama slammed his hand on the fire that was being used as a light source, and stormed off into the mist.

After the Rahi side took over him, he felt comfortable as he believed that he was stronger than his friends, which caused him to defect to the Visorak horde thanks to Roodaka's manipulation. However during the final battle, Vakama began to realise his mistakes and eventually rejoined his friends, reminded of the reason how he became a Toa in the first place.

Having become a half Toa/half Rahi, Vakama's powers changed drastically. For one, his mask of Concealment was mutated and no longer worked, and his fire powers were restricted to his right hand, which a small flame would come out of. He also received the ability to fire a Rhotuka spinner, which Norik describes as a "powerful tool", and he also had enhanced strength and agility. 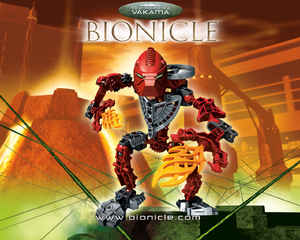 Vakama in the set form. 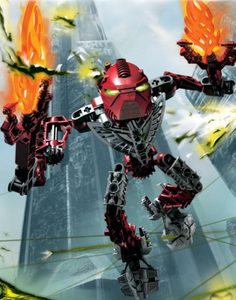 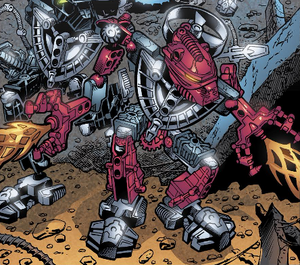 Vakama as seen in the comics. 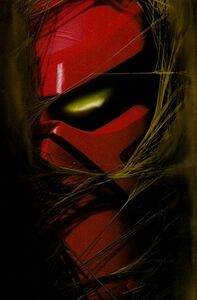 Vakama emerging from the Visorak's web. 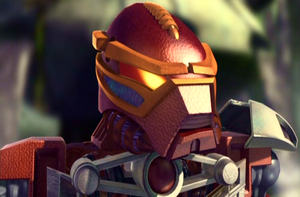 Vakama in his Hordika form. 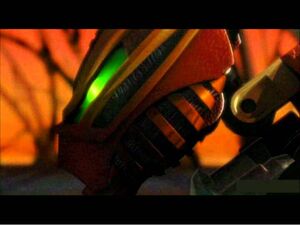 Vakama succumbed by the Hordika Venom. 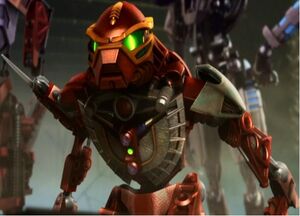 Vakama after he saw an army of Visorak.