Servant of the Skeleton King

Member of the Skeletal Circle (defected)

Revering the power of the Dark Ones.
Casting spells and curses.
Resenting and rejecting the Skeletal Circle cult including Ma and Pa Sheenko.
Harnessing and unleashing her dark magic.

Revive the Skeleton King and rule by his side (semi-successful, yet betrayed upon death).

Valeena, sometimes misspelled as Valina, better known as the Skull Sorceress and the Skull Witch, is a diabolical witch with a lich-like physical appearance fitting her evil nature, who is a loyal disciple of the malevolent Skeleton King and an antagonist from the Super Robot Monkey Team Hyper Force Go!.

When the Monkey Team and Jinmay attempted to rescue Chiro from the Skeleton King's jungle hidden beneath the badlands, Valeena attempted to kidnap Jinmay, and the rescued Chiro and the rest of the Monkey Team chased after her. She then summoned one of the Dark Ones that was fused with the head and essence of the Skeleton King, atop the Dark Ones' forgotten pyramidal temple within the Savage Lands in an attempt to destroy the Monkey Team. When the Dark One was injured by Antauri, she lost her power, and was defeated by Chiro. She was tossed into a vat of formless ooze as the savage lands and the jungle beneath it were destroyed.

Valeena returned only to wind up trapped in a medallion which comes under Mandarin's possession in the same episode. When Mandarin abused her power to create the Monkey Team's worst fears, she trapped him and wanted to use the Skeleton King's skull to resurrect him.

Valeena and Mandarin did, finally, resurrect the Skeleton King at last, but instead of being rewarded by her master, he killed her with a powerful energy blast that reduced her to ashes (though Chiro tried to prevent this).

She is an evil, beautiful and powerful sorceress, with the rare ability to summon the one of the Dark Ones through careful incantations. She can create bubbles, teleport, steal souls, summon small bat-ilke fiends and hurl deadly energy blasts. 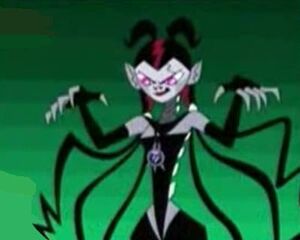 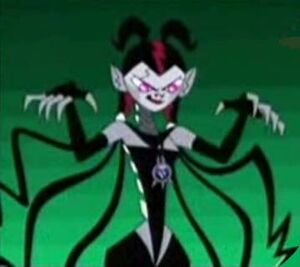 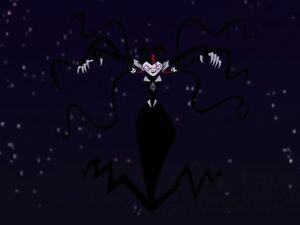 The Skull Witch aka Valeena. 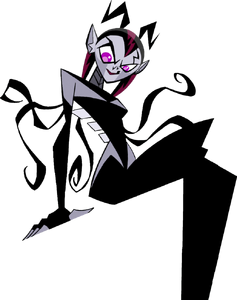 The Skull Sorceress aka Valeena. 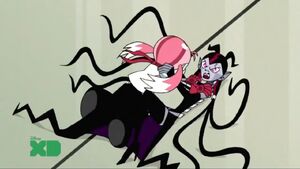 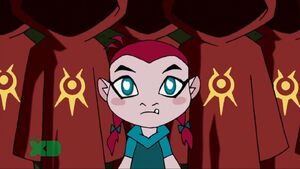 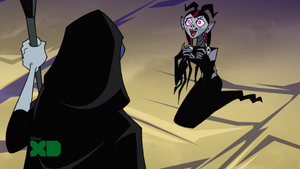 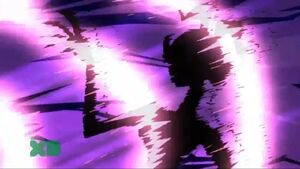 Valeena's death
Add a photo to this gallery

Retrieved from "https://villains.fandom.com/wiki/Valeena?oldid=3576608"
Community content is available under CC-BY-SA unless otherwise noted.