Help Le Chiffre to win the tournament and make out with Le Chiffre (failed).

Valenka is a supporting antagonist of the 2006 James Bond film Casino Royale. She is the girlfriend and henchwoman to Le Chiffre of Quantum.

She was portrayed by Ivana Milicevic, who also played Kathryn Kidman in The Howling: Reborn.

She is the girlfriend, mistress and criminal partner of Le Chiffre and is seen in the Bahamas where he finds out 007 broke into an embassy in Spain. Valenka is coming out of a swim and has a sexy shower.

Valenka travels to Montenegro with Le Chiffre as her boyfriend had set up a high stakes poker game and was also playing in it. On the first night of the Poker tournament, Valenka is standing guard in the Presidential Suite of the hotel. She later calls Le Chiffre back to the room during a break and when he meets her at the balcony and asks what's so important, they are ambushed by Obanno and his liaison who threaten to cut off Valenka's arm if Le Chiffre doesn't give him their money. Bond stops Obanno and kills him and his bodyguard. Valenka is safe but she stays with Le Chiffre despite Obanno's comments that she'd be better off with another boyfriend.

Not wanting to be alone again after what occurred the previous night, Valenka joins Le Chiffre at the Casino on the second night of the game, when Bond becomes a threat to Le Chiffre, Valenka poisons Bond's martini with digitalis. Bond is saved by Vesper Lynd however and returns to the poker table for the last round of the game, much to Valenka's horror.

She smiles and encourages Le Chiffre but then he loses. She kidnaps Vesper Lynd, and with Le Chiffre takes Bond captive. Valenka goes off to torture Vesper but Mr. White breaks in and shoots her to her death. Le Chiffre would later suffer the same fate after his pleas to Mr. White fall deaf.

Bond eventually learned that Quantum was nothing more than a front run by Ernst Stavro Blofeld of SPECTRE, and that Valenka, along with Vesper, Mr. White and Le Chiffre, were all pawns as part of Blofeld's true plot to wreak psychological pain on Bond. 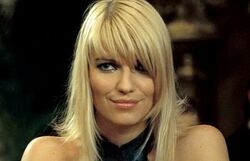 Valenka about to poison Bond's drink. 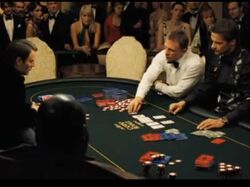 Petrified her boyfriend might lose, Valenka leans in closer 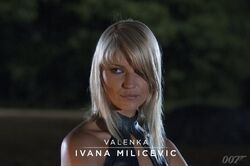 Promotional art of Valenka.
Add a photo to this gallery

Retrieved from "https://villains.fandom.com/wiki/Valenka?oldid=3794101"
Community content is available under CC-BY-SA unless otherwise noted.