Scientist
Member of the Seven Disasters

She is voiced by Aya Endō.

Hailing from another world, Valenti's past is enigmatic. She was forced to live isolated, developing weapons for someone, until she was summoned to Brittania by Lilia, who sought to find others who shared her destructive mentality. Valenti agreed with Lilia's notions to destroy the world, and joined her on her quest.

While traveling Britania, Valenti comes across a mine run by gnomes, who ask for her help in defeating a Crystal Golem that is terrorizing them. Valenti agrees and disposes of it, but then demands that the gnomes repay her with thousands of crystals. The gnomes attempt to repay her, but she is so ruthless in her charge that they try to cut the deal off. Valenti decides that she will kill the gnomes to make up for her lost payment, but Diane, King, and Merlin of the Seven Deadly Sins arrive to help the gnomes. Valenti flees into the mine and meets up with Lilia, and they discover a crystal imbued with magic power. They use it to summon another villain from another world, and then bring the cave down. The Seven Deadly Sins lose them, but know that they will return.

Later, Valenti saves a storyteller from monsters, and asks that he give her a tour of Brittania in return. He agrees, though she mainly only wants to see some of the most dangerous and evil places in the world. She is horrified when she hears the story behind the Giant Chessboard: an evil king brainwashed his knights to play an eternal game of chess with their own lives. Despite being disturbed, she asks that the storyteller tell her the darkest and most horrible stories of Brittanina, as she needs them as incentive to destroy the world.

After Lilia summons more villains from other worlds, Valenti is tasked with luring out the Seven Deadly Sins to battle her while Lilia prepares.

Valenti comes across as chipper and friendly, but is conniving and calculating. Even when fighting or being opposed, she retains a smile and a carefree attitude, and sees adversity as just another issue she has to resolve, taking very few things seriously. She can also be ruthless, not backing down from what she thinks she deserves. 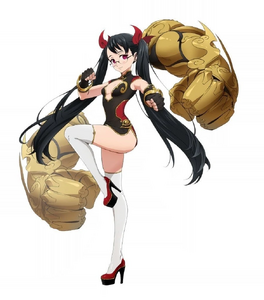 One of Valenti's alternate costumes 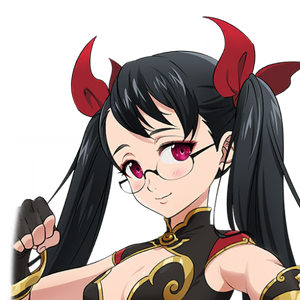 Retrieved from "https://villains.fandom.com/wiki/Valenti?oldid=3948455"
Community content is available under CC-BY-SA unless otherwise noted.