Valentine is a villain (later anti-heroine) and playable character in the indie game Skullgirls. Prior to being destroyed by the hands of the Skullgirl, the Last Hope (which Valentine is the remaining member of) was under the control of Lab-Zero, wrapped in darkness and carried out a wide range of tasks ranging from reconnaissance to interference work and advanced research.

Currently, Valentine plays the role of faithfully serving the Skullgirls and practicing her will from the shadow, now serving Double and Marie. It is she who is responsible for turning Painwheel into a monster with Brain Drain.

Initially, Valentine was unavailable and Squigly and Umbrella took her place, but later the developers decided that more playable villains needed to be introduced. She is an antagonist in almost every story along with Double.

Almost nothing is known about Valentine's past. She was an employee of Last Hope - a group of specially trained employees who were previously in the Anti-Skullgirl Laboratories. Together with other members she worked for the mysterious Lab-Zero, performing various tasks, ranging from sabotage and ending with advanced research.

Valentine lost an eye because of the incident in which Lab-7 was destroyed. The cross-shaped pupil in her remaining eye is the result  of experimental drug usage. The scar on her lips was originally hers.

After Double and Marie killed all the members of Last Hope, Valentine surrendered at the mercy of the winner and now dutifully serves the current Skullgirl. At the same time, she secretly studies the enemy from the inside and her devotion is very fragile.

In her storyline, Valentine defeats Double and Marie, taking possession of the Skull Heart. However, knowing the artifact's habit of distorting the owner’s desires, Valentine realizes that her dream is to resurrect fallen her comrades from Last Hope would only turn into a disaster. She instead wishes to become the next Skullgirl to further her research, leaving her fate in the hands of Painwheel.

The after credits scene shows Painwheel finding Valentine's signature bonesaw left behind, with no other trace of her in the catacombs.

Valentine is a very secretive person, and her true identity and past are unknown. She is cool and crue, speaking in an impartial and condescending manner. She does not hesitate to resort to murder. While she is immoral, she some guilt for creating Painwheel. In the past, she was shown to willingly disobey orders from her superiors to treat injured civilians, and even hesitates when Brain Drain demands she bring in Carol for experimentation.

She is strongly attracted to medical science, and often treats her actions as experiments or research. This is very clearly seen when she meets Ms Fortune and shows a tangible interest in her abilities, wanting to examine her further by cutting her open.

Between her fast run and air dashes, large disjointed buttons, and her plethora of movement options, Valentine has some strong offensive tools to stay in her opponents face. But make no mistake, she can use all these tools to also play surprisingly defensive when she needs to when added with her safe air fireballs. 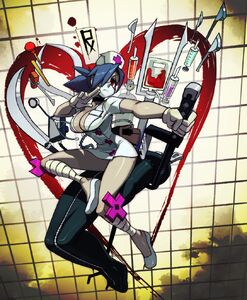 Retrieved from "https://villains.fandom.com/wiki/Valentine_(Skullgirls)?oldid=3370823"
Community content is available under CC-BY-SA unless otherwise noted.