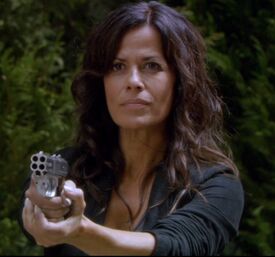 Valeria Crossley is the main antagonist of "Extradition II: The Actual Extradition Part," which is the tenth episode of the fifth season of Psych.

She was played by Venus Terzo.

Valeria Crossley is the wife of notorious mob boss Frank Crossley, but as it would eventually turn out, Valeria was the one in charge while Frank was incarcerated. She met Pierre Despereaux in jail while visiting Frank and seduced him into breaking out to prove his devotion to her, which he does with inadverted help from Shawn and Gus. In actuality, Despeareaux's escape was part of Valeria's evil plan to set him up, which she does by placing his cigarette at a crime scene. Valeria also eliminates an FBI agent who she feared was getting too close to the truth, and to get rid of loose ends, she even killed Frank. While Shawn and Gus are looking for Despereaux, they find him in the woods, with the evil Valeria pointing a gun at him. Shawn uses Despereaux's grappling hook to take down Valeria, who chases after the trio. After finding them at a cabin, Valeria encounters Despeareaux and shoots him, but she is later knocked out by Shawn. She was likely sent to prison afterwards.