Valerie is a school rival of Numbuh 5 and a favorite of their teacher Mrs. Thompson.

In "Operation: H.O.U.N.D.", Numbuh 5 is attacked by a monstrous poodle while walking past Valerie's house on the way to school, and claims that Valarie's dog ate her homework, which Valerie denies, claiming her dog is a harmless puppy.

Later, she, Numbuh 2 and Numbuh 4 sneak into Valerie's house to investigate, and find her pet dog, who is indeed a small puppy as she said.

When Valerie discovers them, it is revealed that she can transform into a "Were-poodle" and that she was the monster who ate Numbuh 5's homework.

Mrs. Thompson arrives on the scene and scolds Valerie for letting her secret be revealed, as they both transform into weredogs, explaining their unusual relationship.

Valerie was cursed with lycan-based powers, such as superhuman strength, speed, dexterity, accelerated healing and animalistic senses as well as sharp canines and claws and the ability to transform into a werewolf like form. 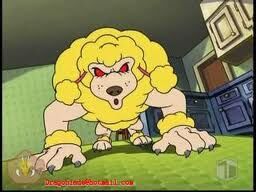 Valerie's weredog form.
Add a photo to this gallery

Retrieved from "https://villains.fandom.com/wiki/Valerie?oldid=3434341"
Community content is available under CC-BY-SA unless otherwise noted.