Villains Wiki
Register
Don't have an account?
Sign In
Advertisement
in: Mature, The Sopranos Villains, Male,
and 13 more

Missing Mobster
Valery is a minor recurring antagonist in season three of The Sopranos.

He was portrayed by Vitali Baganov, who also voiced Ray Bulgarin in the Grand Theft Auto IV trilogy.

Valery was born and raised in Russia in very poor living conditions and faced many hardships during his life, and he eventually joined the special forces group known as Spetsnaz, where he managed to kill sixteen Chechen rebels by himself during the Chechen war. Sometime later, Valery left the Soviet Union to go to the United States and joined the Russian Mafia in New Jersey, where he fell in love with the prosperous American life style he never had growing up and became very lazy.

...To Save Us All From Satan's Power

Valery makes a brief appearance where he drunkenly meets Tony Soprano as he sees the leader of the Russian mafia, Slava Malevsky, to discuss business.

Sometime later after Tony comes down sick with the flu, he tells Christopher Moltisanti and Paulie Gualtieri to go to Valery's apartments to collect debts that he owes to Silvio Dante. After arriving, he tells them where his money is and then attempts to order Paulie to put his tv remote back onto its docking station, but Paulie breaks it out of spite. Angered, Valery insults Paulie and the two begin fighting until he's choked unconscious with a lamp stand. Now having to get rid of Valery, Paulie and Chris wrap him up in a rug with duct tape and then put him into Paulie's trunk.

After driving out to Pine Barrens to bury him, Chris and Paulie discover that Valery wasn't dead as they thought he was since he attempted to chew through the tape, and they walk him through the snow planning on executing him. After forcing him to dig is own grave however, Valery hits Chris in the head with the shovel and kicks Paulie in the groin before running off, where he's eventually shot in the head by Paulie. To both of their astonishment however, Valery gets right back up and runs off out of sight. After following his blood trail, they find out he completely disappeared. 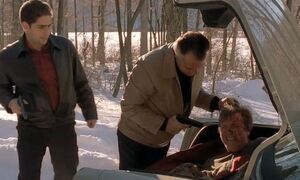 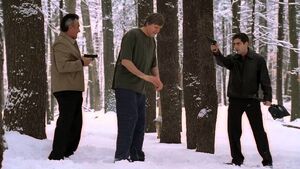 Valery just before he manages to escape his execution.

Paulie shoots Valery in the head... 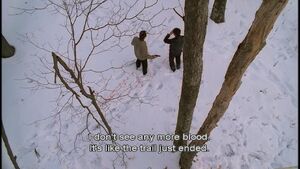