Conquer Neverwinter and plunge it into chaos (failed).

Valindra Shadowmantle is one of the major antagonists of R.A. Salvatore's The Neverwinter Saga. She was an Overwizard of the Host Tower of the Arcane and Master of the North Tower who was responsible for the Brotherhoods operations in the northern quadrant of Faerûn. Later, she became an important player in the politics of rebuilt Neverwinter. She recently appears in the MMORPG Neverwinter as the primary antagonist espeacially in the Neverdeath Graveyard arc, the Sharandar arc (alongside the formorian king Malabog and their blue dragon Fulminorax), the Castle Never arc and the Dread Ring arc (as the final boss).

Born in 1225 DR in the High Forest, where she trained as a wizard. Frustrated with the slow pace of her education, she left her homeland in 1322 DR to pursue her own goals. Valindra made her way to Mirabar where she found little trouble persuading a trusting old wizard to take her on as an apprentice. After a year working with her mentor she murdered him and appropriated his spellbooks and magic items. From there she headed for Luskan and made contact with the Arcane Brotherhood, eventually earning a place as one of their lesser agents in 1362 DR.

Since then she applied herself to carrying out assignments with precision and alacrity, gaining a reputation that put her in good stead when the Archmage Arcane sought a replacement Overwizard of the North Tower in the wake of his purging of the organization in late 1371 DR or early 1372 DR.

It appears that after the destruction of the Hosttower of the Arcane, and the death of herself and her husband Arklem Greeth she appeared to have become a lich. Their phylacteries were made from gems that were given to them by Jarlaxle. She had long lustrous black hair, delicate features and the inner flames in her eyes common to liches. She seemed to enjoy being reminded of her beauty and she appeared to be sweet at times. But her instability grew over time and she became more unstable and aggressive in combat - not caring if allies got caught in the cross fire.

During her travels with the fanatics of Asmodeus under the command of Thay she showed that she was fully willing and hoping to join in the ranks of Szass Tam. Using a powerful rich-red ruby scepter of Asmodeus that was given to her by Szass Tam and with the prayers of the cultists, she called forth a pit fiend called Beealtimatuche whom in the end was responsible for the death of Bruenor Battlehammer. She was cast below ground in her wraith form by Jarlaxle and as she did so she swore to murder Jarlaxle, Drizzt Do'Urden, and Dahlia Sin'felle.

100 years after Neverwinter destroyed by Mount Hotenow's eruption, a new Neverwinter was built. However, decades later, Valindra, her loyal dragon Fulminorax, her undead army and Thayian Red Wizards attacks Neverwinter, causing chaos everywhere and making many evil forces found advantages into attacking Neverwinter, including Nasher rebels, orcs, the Cult of the Dragon, frost giants, Blackdagger Bandits, Drows and even dragons. She made a deal with the fomorian king, Malabog, in the Feywild. In exchange for destroying New Sharandar, Valindra gave to him a blue dragon named Fulminorax and a blue Orb of Dragonkind with which to control it. Malabog's dark fey army quickly overran much of New Sharandar, and even corrupted a moon elf named Celadaine.

Undead had begun rising out of their graves in Neverwinter's graveyard, leading the Doomguides who watched over the graveyard to call upon the Heroes of Sleeping Dragon Bridge lest they be overwhelmed. The heroes discovered that the Red Wizards of Thay, led by Valindra, were using the undead to lure unsuspecting Doomguides into their clutches to create even more powerful undead monstrosities, and collecting relics for similar purposes. The Thayan leader, Xivros, hoped to raise Arleon the Unforgiven, a nigh-unstoppable ogre warrior in life, as his undead servant. Though he succeeded in raising the creature, the heroes quickly dispatched it.

In another region of the graveyard, the Cult of the Dragon was searching for something. It turned out they were interested in the Waterclock Guild Crypts, in which a former high-ranking guild member and secret dragon cultist had secreted the blue dragon Azharzel and the ritual of the dracolich upon the occasion of his death. Unfortunately, Valindra and her Thayan allies were also seeking the crypts, and when the Cult of the Dragon broke in Valindra killed them and claimed both the dragon and the ritual as her prize.

Having grown considerably in strength since their last encounter with Valindra, the Heroes of Sleeping Dragon Bridge set out to finish what they started at the beginning of their adventure. Entering Castle Never, which had been taken over by the lich, the heroes battled through armies of undead and some of Valindra's most powerful servants. Though they succeeded not only in retaking the castle but also destroying the dracolich Azharzel, Valindra eluded them.

While the elves of New Sharandar were busy dealing with Malabog, Valindra's Thayan armies established a Dread Ring within the Neverwinter Woods. There, she sought to raise the ancient black dragon, Lorragauth, as a massive dracolich. Neverwinter raised a massive army, known as the Neverwinter Vanguard, which penetrated the Dread Ring and set up a base camp to fight back against the Red Wizards. The Neverwinter Vanguard also received unexpected aid from a group of renegade Red Wizards known as the Thayan Resurrection. Led by Rath Modar, this group of Red Wizards was exiled from Thay for speaking out against Szass Tam. With the help of their allies, the Heroes of Sleeping Dragon Bridge defeated the Thayans and finally destroyed Valindra herself. 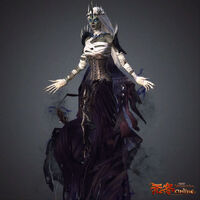 Retrieved from "https://villains.fandom.com/wiki/Valindra_Shadowmantle?oldid=3531105"
Community content is available under CC-BY-SA unless otherwise noted.