Having Princess Eirika as his wife

Valter (translated Walter in the Japanese version), also known as the Moonstone, is a major antagonist of Fire Emblem: The Sacred Stones. He is third strongest general in Grado's Imperial army, both in the past and the present.

Valter is a sadistic Wyvern Knight during his past career as a Grado general, Emperor Vigarde fired him for slaughtering innocents but Valter then brought Glen's mangled corpse back to Castle Grado to show his younger brother Cormag, then framing Eirika for his death, as well as giving morale for Cormag being the new Sunstone. Cormag then joined Eirika after she persuades that she did not kill his brother. In Ephraim's route, Valter accused General Selena Florspar of the same treason General Duessel the Obsidan was accused of (failure to carry out orders), making Selena sail off to Grado as Valter places the Ranger Beran as commander of the forces at Bethroen, who fails and either dies or sails off in cowardice.

According to Duessel puts it) until, having had his own lance broken in battle, when Cormag then points out a weapon is and one of his reasons to fight is his desire to capture her and make her his puppet bride; He dies at the assault on Jehanna Hall. In Creature Campaign Valter is unlocked by beating the seventh floor of the Lagdou Ruins. 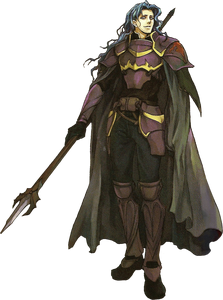 Retrieved from "https://villains.fandom.com/wiki/Valter?oldid=3791340"
Community content is available under CC-BY-SA unless otherwise noted.