Flight
Sorcery
Ability to transform into a giant demon

Attacking planets and capturing their magic.

Be the most powerful wizard in the magic universe (failed).

Manipulative Magician
Valtor, also known as Baltor, is the secondary antagonist of the Winx Club series, serving as the main antagonist of Seasons 3 and 8. He is also the third villain (the other two were Lord Darkar and, collectively, The Trix).

Valtor is a strong wizard who would love to do nothing more than to become the strongest wizard of them all. He turns people into monsters that are willingly to serve for him.

He was with the Ancestral Witches when they destroyed Domino. He was once a companion of Ms. Griffin when they were young. It was at this time when he met Bloom's parents who were both stronger than him.

He was sent to the Omega Dimension the day Domino was defeated. There he was frozen, intended for eternity, and was awake while frozen.

When the Trix were sent to the Omega Dimension, they released Valtor, intending to offer him up to the security snakes in their place. However, he destroyed the snakes and escaped the Omega Dimension along with the Trix, making them his minions. He took over Andros (Tides in 4Kids dub) and corrupted many mermaids, turning them into his minions while adding their power to his. His minions were branded with his symbol. To increase his power, Valtor would go to different planets and absorb their energy. The Trix would often compete with each other for his favor.

Valtor made a deal with Chimera and Cassandra to help them deal with their rival, Stella, in exchange for their eternal allegiance. Cassandra put a spell on Stella's father, King Radius, to turn him against her and make Chimera princess of Solaria, but Stella later broke the spell. Valtor recognized Bloom and confronted her on Andros, but he did not wish to fight her when she was too tired to fight, as it would not be satisfying. When Layla confronted him, he cast a spell to blind her, although she was later able to reverse this. Valtor also gave Sky's ex-fiancee Diaspro a potion to put Sky under a spell to make him love Diaspro and attack Bloom; however, Stella broke this spell and Diaspro was banished.

Valtor eventually decided he didn't want Andros as his base anymore so he relocated to Cloud Tower, taking it over, imprisoning Griffin, and brainwashing the other witches into "zombie witches". He later decided to destroy Andros by opening a portal to mix its positive energy with the Omega Dimension's negative energy. He was content to leave the brainwashed mermaids to die with Andros, viewing them as expendable. Tecna was able to close the portal, though she was trapped in the Omega Dimension in the process (although she later escaped with the help of the Winx and Specialists).

Because of this, Bloom, Stella, Flora, Musa, and Layla sought revenge on Valtor. They confronted him at Cloud Tower and fought him, but he gained the upper hand, telling Bloom that he killed her parents Oritel and Miriam. This gave Bloom further motivation for revenge, however, using a spell he gained from Planet Oppositus, he turned her fire into ice and froze her with it. Faragonda, Griffin, and Saladin arrived to fight him while the other Winx released Bloom and Stella teleported them out, causing Valtor's next attack to hit the Trix instead.

Valtor eventually relocated to a new base, in a cave in the forest. He later challenged Faragonda, Griffin, and Saladin to a battle, but made them fight each other with an illusion while trying to steal the scrolls from Alfea. Bloom defeated him with the Water Stars, which are the opposite power of dragon fire. But before Bloom could kill Valtor, he told her that Oritel and Miriam were really trapped inside him due to an absorption spell he cast, and destroying him would do the same to them. Although Valtor escaped, Bloom later heard from the Ancient Witches that this was a lie, and her parents were really in another dimension.

Using the Spell of the Elements, Valtor flooded Cloud Tower, sent tornadoes at Red Fountain, set the forest around Alfea on fire, and caused an earthquake at Magix. The Winx fought Valtor below the lakebed but he transformed into a demon and used a talisman to control the power of the water stars and use them against Bloom. However, Bloom used fairy dust to open the box he contained his spells in, undoing all his spells. When the lakebed returned and the cave began to flood, the Trix abandoned Valtor, who was seemingly killed when the cave flooded.

However, Valtor returned and captured most of the Specialists, imprisoning them in Tides while controlling elements - having held onto the Spell of the Elements - to take the forms of them and fight the Winx. These clones disappeared when Bloom knocked Valtor out with a fireball. The Ancient Witches, unable to act on the outside world from the dark world but able to act on Valtor, cast a spell to take away his wizard form and turn him back into a demon forever. Bloom separated her flame from her and entered that of Valtor, where Valtor appeared and attempted to get Bloom to work with him against the Ancient Witches, but she declined his offer and used fairy dust to extinguish his flame, destroying him.

In the 4Kids version, Bloom uses fairy dust upon entering Baltor's mind, but this only removes the Ancient Witches' spell. After Baltor tries to make the deal, Bloom says her dragon fire will fight Baltor's dragon fire until one is put out, and extinguishes Baltor's flame with Dragon Fire Fury, destroying him and sealing his essence in oblivion.

In the Nickelodeon and Italian versions only (as Season 8 does not exist in Cinelume or 4Kids versions), in Season 8 Valtor is revived and is once again the main antagonist of the season. He is destroyed a second time by the Winx with a magic beam. 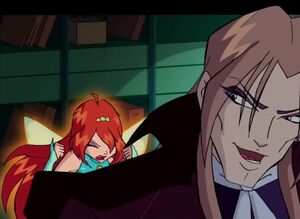 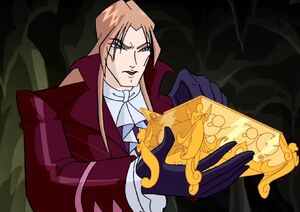 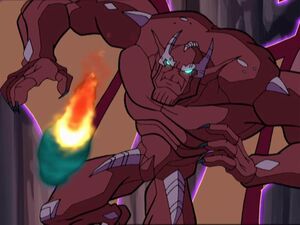