Vamp was born in Romania and lost his entire family during a church bombing. Vamp survived but his body was pierced by a crucifix and buried under rubble with his parents. To survive, he was forced to drink his family's blood, which Vamp would continue to have a taste for. Eventually, Vamp was rescued and pulled out of the rubble. Before he joined Dead Cell, Vamp was the subject of a new nanomachine experiment that was designed to grant him superhuman physical attributes, near-immortality & regenerative powers.

The experiment was successful, making Vamp seemingly immortal, and he became one of the first members of Dead Cell. It was also hinted that Vamp was the lover of the late Marine Commandant Scott Dolph, because he's bisexual, and that he also has a very close relationship with the Marine Commandant's daughter; Fortune. After Colonel Jackson, Dead Cell’s original leader, was arrested, imprisoned, and eventually died, Vamp took command of the unit, until Fortune joined. To which, Vamp stepped down as leader and let her become the leader of Dead Cell.

In 2009, Vamp and other Dead Cell members joined forces with the Sons of Liberty, a terrorist organization under the command of the Ex-President; Solidus Snake. They helped in taking control of the Big Shell, an offshore cleanup facility in New York.

During the takeover, Vamp tracked down the Alpha team of SEAL’s Team 10 and slew the entire unit single-handedly. He also attempted to launch a sneak attack against Raiden, a FOXHOUND agent, but a survivor of Team 10, Iroquois Pliskin, distracted Vamp. However this revealed his identity as Solid Snake to the Dead Cell member when he was injured and Vamp noticed he had a similar scent to Solidus. The apparent vampire went after Raiden again, but Fortune contacted him, ordering him to return since she’d managed to capture President Johnson. Vamp met up with her on the B–C connecting bridge and carried the president along with the Football into the Shell 1 Core, while Fortune dealt with the SEALS.

Later, while Fortune was fighting Raiden on the Deep Sea Dock, Vamp showed up and told her that Fatman had apparently gone rogue and turned into a “stereotypical mad bomber”. Raiden tried to use the distraction to shoot Fortune, but her “luck” deflected the bullets so that they hit Vamp. Despite this seeming to kill him, he woke up after Raiden left and explained to Fortune that he couldn’t die twice since he’d already “died once”.

Later on, Vamp caught Soldius Snake on a Harrier jet he was piloting as the son of Big Boss fell off the Shell 1-2 connecting bridge. As Solidus took the co-pilot seat, he and Vamp attacked Raiden and a Kasatka helicopter under the command to the Philanthropy. Raiden managed to shoot down the jet, but it was caught by the Metal Gear RAY prototype and Solidus ordered Vamp to leave. He retreated to Shell 2, using his apparently supernatural powers to run across the water’s surface and up a support pillar. Vamp later found out from Revolver Ocelot that Raiden was apparently going to rescue Emma Emmerich so as to have her install a worm cluster in GW, plant underwater mines in the now flooded Shell 2, and wait in her cell.

Vamp and Raiden ran into each other in the Big Shell’s purification chamber. Raiden attempted to shoot Vamp, but Vamp managed to dodge them all. However, Vamp miscalculated Raiden’s movements as one of the bullets grazed his cheek. This was due to Raiden's muscle movements being “different” and his face was grazed by gunfire.

Vamp explained the Arsenal Gear had a purified hydrogen bomb onboard and hinted that Dead Cell was framed for various crimes they and Colonel Jackson didn't commit, before the two battled each other.

Vamp was beaten, sinking into the purified water as he bled. It appeared that Vamp drown to his death, but he still managed to survive. Later that day, Vamp jump from the ocean and processed to sneak attack Emma Emmerich as she was crossing an oil fence. Vamp held her at the tip of his knife. Raiden managed to eventually shoot him with a sniper rifle, but Vamp stabbed Emma in the back, which led her bleeding to death.

In 2014, Vamp had become part of Liquid Ocelot’s forces, acting as a subcommander for his army of mercenaries.

Solid Snake spotted him telling Laughing Octopus to leave one of the soldiers alive, while on a mission in South America to rescue Naomi Hunter. Later on after Snake defeated Laughing Octopus, Snake tracked down Naomi and found her boarding a helicopter with Vamp. Snake then shot Vamp in the head. Before he fell unconscious, he told the soldiers to take the shot to temporality shut down their nanomachines. After which, Vamp said that he was going to take a nap. A few minutes later, former Dead Cell member regenerated the gunshot and got right back up. Vamp eventually encountered cybernetically enhanced Raiden, fighting him until a number of Gekkos managed to pin Raiden down. This allowed Vamp to stab him in the chest twice, but Raiden didn't die because his synthetic cybernetic biology granted him "immortality". Vamp asked Raiden if he too was immortal, but Raiden replied that he just doesn't fear death. Snake managed to free Raiden by sniping one of the cables, and Raiden took on both Vamp and the Gekkos. Both of them suffered severe wounds and

the former Dead Cell member eventually collapsed from his injuries, allowing Raiden to escape, only for Vamp’s nanomachines to heal him again. After regaining consciousness, Vamp called Liquid Ocelot and reported that Snake’s DNA wasn’t able to unlock the Patriot’s SOP System.

Some time afterwards Vamp traveled to Eastern Europe. Vamp, along with Dr. Naomi Hunter, picked up Liquid Ocelot, after they acquired "Big Boss'" corpse. The three attempt to escape, but are intercepted by Meryl Silverburgh, her team; Rat Patrol 01, and a large group of military soldiers. Vamp witnessed Liquid's control over the SOP system. After which, Liquid told them that they no longer need Big Boss' Corpse and told Vamp to give the corpse to Snake. However, Vamp tossed the corpse into a fire, killing both "Big Boss" and Big Mama, AKA EVA. As they escaped, Vamp discussed their plans with Liquid Ocelot and Naomi to get Metal Gear REX’s rail gun from Shadow Moses Island. As they were talking, Vamp discovered Metal Gear Mk II, which had been secretly planted on their craft and destroyed it.

After Liquid Ocelot succeeded in obtaining REX’s rail gun, he ordered Vamp to wait in REX’s underground base, knowing Snake would interfere. The former Dead Cell member also sealed the door to the cargo elevator and warehouse, forcing Snake to face him. Before confronting Snake, Vamp warned him that Suicide Gekkos would arrive in a few minutes and are set to explode.

Vamp battled Snake and eventually fell unconscious from his wounds and Snake remembered Naomi’s words telling the truth behind Vamp’s immortality. He injected the ex-Dead Cell member with a drug that suppressed his nanomachines, taking away his regenerative powers.

After which, the Suicide Gekkos showed up. Vamp was hoping that the Gekkos would explode so that Snake and that he could finally die. However, Raiden arrived on the scene, killing all the Suicide Gekkos. Vamp challenged him to finish him off and the two battled on top of Metal Gear REX. Before confronting Raiden, Vamp requested that the two only use their knife in combat. Raiden accepted Vamp's request and the two fought each other.

The ex-Dead Cell member eventually gained the upper hand. As he disarmed Raiden and reached for his sword to decapitate the cyborg, Raiden knocked the blade out of his hand, driving him through with it. Mortally wounded, Vamp fell to the ground, but his nanomachines started up again, keeping him alive but in terrible pain. Naomi gave Otacon a nanomachine suppressor. She ask Otacon to give Vamp the injection, not for revenge, but to ease Vamp's pain. However, before Otacon could choose, Vamp grabbed the suppressor from the Metal Gear Mk. III, and injected it into himself anyway, permanently deactivating the nanomachines and finally died after a number of terrible convulsions.

Vamp was subjected to a nano-machine experiment that granted him a variety of superhuman capabilities, akin to those of mythological vampires, such as pale skin, wall crawling, red eyes, superhuman agility, superhuman speed, superhuman strength, gravity defiance and rapid cellular regeneration. 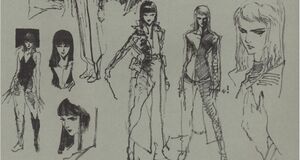