Convert and kill everyone that oppose to the Vampires.

The Vampire is one of the evil roles from the mystery RPG game. The Vampire wants to kill and convert everyone who opposes to them.

The Vampire's goal is kill and convert everyone who opposes to them and survive until end of the game. They can win with the Witches and Survivors.

The Youngest Vampire (last Vampire) chooses a person to convert/kill them every night. If the target is a Town member (except Vampire Hunter), Survivor when not using a vest, Jester or Amnesiac, the target will turn. If the target is a Mafia and Coven member (except Godfather), Pirate, Guardian Angel, Juggernaut before second kill or Witch (without basic defense barrier), they won't convert, they will die. When the Vampires become four people, they will kill all people, won't convert.

The Vampire has a basic attack to these people;

The Vampire converts these people;

The Vampire can't kill these people;

The Vampires must kill all Town and Mafia people and survive. They can win with the Witches and Survivors. 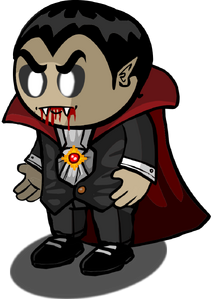 Avatar of the Vampire.

Avatar of the Vampire in the mobile.
Add a photo to this gallery

Retrieved from "https://villains.fandom.com/wiki/Vampire_(Town_of_Salem)?oldid=3546122"
Community content is available under CC-BY-SA unless otherwise noted.