Sucking the fluff out of bears

Anthropomorphic Vampires
The Vampire Bears are the main enemy faction in Episode 10 of Naughty Bear, along with the Zombears. They are vampire bears, as their name suggests, and they take over the island when they are summoned by Stardust to kill Naughty Bear. They have white, blank eyes (ironic since most bears have black eyes), silver fur, have white fangs, and are armed with Vicious Vampire Claws. They have control over the Zombears. Unlike the Zombears seen in Episode 4, the Vampires and Episode 10 Zombears refrain from attacking normal bears, probably to save them for later. Their leader is the Vampiricorn.

The Zombears are summoned, and have the intelligence to know how to use guns. The Vampires are all over the island, but they don't attack the bears. Naughty goes on a killing spree, and kills several Zombears, Vampires, and normal bears. The normal bears come back as Vampires. The Vampiricorn is killed multiple times, but is ressurected. Stardust himself is killed, but he too comes back, but as a Zombear known as Ghoul Stardust. There is one final battle at the Disco, and all the bears are killed by Naughty Bea, who returns to his cabin. 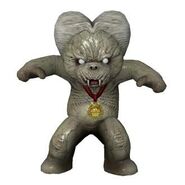 The Vampiricorn
Add a photo to this gallery
Retrieved from "https://villains.fandom.com/wiki/Vampire_Bears?oldid=3708614"
Community content is available under CC-BY-SA unless otherwise noted.