Priest (Before his true nature was exposed)

Sucking bloods from his victims and making them his 'devoted slaves'.

Take over a town where he lives with his own army of ghouls.

Sadistic Vampire
The Vampire Priest is a minor character from manga and anime Hellsing. Supposedly a quiet and devoted man of God, he was a vampire posing as a priest in a church in Cheddar, England.

He was voiced by J.B. Blanc.

At the time, Seras Victoria was working with the London Police Department and was called out with her special unit to investigate the upheaval the priest and his ghouls were causing.

This power-hungry vampire ambushed Seras with his ghouls, seeking to rape her and then suck her blood to make her his slave- until Hellsing's finest agent was deployed by The Hellsing Organization to 'clean up' the scene. He is shot in the heart and subsequently impaled by Alucard after his Ghoul army is destroyed and he unsuccesfully tries to take Seras as a hostage. 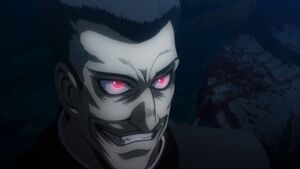