Drink the blood of whoever they may encounter

Legendary Misanthropes
The Vampires are the main antagonists of Season 2, episode 1 in Lost Tapes.

The research in the episode shows that Vampires have possibly been around for centuries. In the 1700s, a mass grave was made outside Venice, where one individual had a brick thrust through his mouth, which cryptozoologists and scholars took to being a real Vampire case. 30 decades later in 2009, a Vampire attacked a man as he left a shopping center in Nevada, America. The Vampire lunged at the man and ripped his neck open, dragging him off to feed on his blood and leaving a blood streak behind.

Later, the Reading family moved into their new house and their son Eddie hated the place on sight. To make matters worse, the door in his room kept on opening and closing by itself, as if something was watching him. The father Dennis didn't believe Eddie that anything supernatural was happening, he just thought it was because of Eddie's sleepwalking past and his adjustment to the new home.

A Vampire broke into Eddie's home during the night and stole Eddie's teddy bear to use in its nest. Eddie woke up to catch a glimpse of the Vampire creeping towards his bed, causing the child to scream in terror, alerting Dennis and his mother Sarah, who heard noises in the attic, which Dennis said was raccoons, so he bought in an exterminator.

Eddie saw the exterminator in the basement, and was startled, thinking him an intruder, but the exterminator explained his job and said they had raccoons in the basement. He asked Eddie to go back to his parents and then looked in the walls for pests. He only found a nest, full of the teddy bear remains, and then found a fierce-looking humanoid creature, which mauled him to death and drained his blood.

The Vampire later chased after Eddie when he found the exterminator's corpse, determined to kill the young boy and likely feast on his corpse. Eddie screamed for his parents, who saw the Vampire, and barricaded themselves in the bedroom after a chase through the living room where the Vampire displayed quick movement like an ape. The Vampire chased the family into the bedroom before demonstrating its strength by breaking the wooden door apart, only to be met with Dennis, wielding a wooden stake from the door, who then stabbed the Vampire to death. A mining village 60 miles North was attacked soon after, causing officials to investigate this case once more, to determine if the beasts are related or isolated phenomenona. 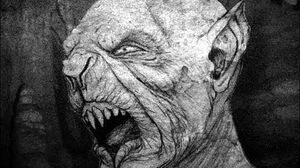 Lost Tapes Season 2 Episode 1 Vampire
Add a photo to this gallery
Retrieved from "https://villains.fandom.com/wiki/Vampires_(Lost_Tapes)?oldid=4002793"
Community content is available under CC-BY-SA unless otherwise noted.