My Children (by Dracula)

My Darlings (by Verona)

Aleera
Verona
Marishka
Vampire Children
Anyone else bitten by the creatures

Drinking blood from their victims.

Converting them to increase their quantities.

Drink blood to survive.
Aid Count Dracula in his quest to win 'war against the world'.

The Vampires are a race of undead bloodsuckers and supporting antagonists in Van Helsing. Their leader is the first of their kind, Count Dracula.

Since after Dracula became what he is now as the world's first vampire, he began amassing an army of vampires and one by one they begin to grow until they trap all of the Romanian land of Transylvania in a nightmarish state of fear.

Van Helsing came to Transylvania and slain one of Dracula's vampire servant.

Soon in the film he is seen with Anna Valerious's Werewolf brother, Velkan Valerious, to power a machine at Frankenstein's Castle to bring to life his Vampire Children. His plan then fails when Van Helsing begins to shoot and destroy the Vampire Children that come to life while the machine is powered, and later speaks to Van Helsing about that he had been alive for hundreds of years, along with the fact that he had supposedly known Van Helsing many years ago, before Van Helsing and Anna escape.

Dracula is then seen with a captured Anna Valerious at a ball in his Summer Palace, dancing with her and telling her that he needed a new Bride, and he nearly bites her to turn her into a Vampire, when Van Helsing comes and saves her life, before being chased by Dracula's Vampire people in their masquerade costumes during their escape. All the vampires in the palace were destroyed by a bomb-like device that emits intense rays of light and killed.

They battled and Dracula tells Van Helsing that he was the one who killed him years ago.

Eventually, after this information was told, Van Helsing kills Dracula once and for all, ending the terrifying reign of the Vampires and lifting Valerious' curse. 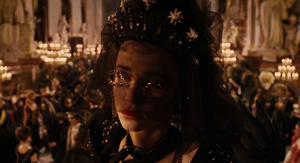 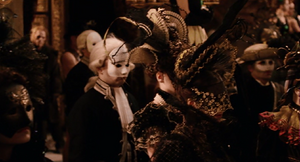 The Vampire people stand masked as the ballroom entrance opens. 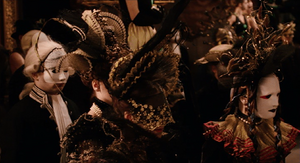 The Vampire people see a batch of vampires charge in carrying Frankenstein over their heads. 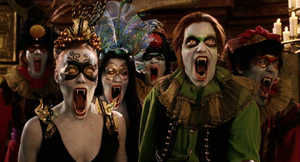 The entire crowd looks up at the pair and in unison, they all remove their masks as their eyes glow yellow, their skin goes white, fangs glide out and hiss angrily. 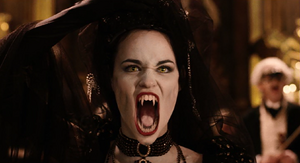 The opera singer removes her mask and her canines become fangs, snarling. 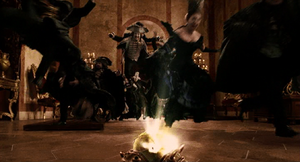 The huge door disintegrates as the vampires crash through it and bound down the hallway.
Add a photo to this gallery
Retrieved from "https://villains.fandom.com/wiki/Vampires_(Van_Helsing)?oldid=4048819"
Community content is available under CC-BY-SA unless otherwise noted.