Hunt down and kill Alan Parrish and his friends (failed).

Van Pelt is the main antagonist of the 1995 film Jumanji based on the 1981 fantasy children's picture book by Chris Van Allsburg. He also appears in the animated series based on the film. In the 1995 film, Van Pelt is portrayed a cunning, murderous, destructive and traitorous hunter who resides within the cursed board game, Jumanji. As a game hunter, he wears a hunter's uniform with a cape and pith helmet. He is also one of the game's main dangers as a portrait of his face is carved on the top left corner of one of the lids of the game box. This incarnation of Van Pelt serves as the basis of his appearance in the animated series. He is also Alan Parish's arch-nemesis.

In the film, he was portrayed by Jonathan Hyde, who also played Alan's father Sam Parrish in the same film, J. Bruce Ismay in James Cameron's Titanic, and Eldritch Palmer in FX's The Strain, and voiced Stricklander from Tales of Arcadia. In the animated series, he was voiced by Sherman Howard, who also played Derek Powers in Batman Beyond, Chief McBrusque in An American Tail: The Treasure of Manhattan Island, and Metal Kor in Jak II.

Van Pelt is first introduced after one of Alan's turns on Jumanji, which releases the hunter, who immediately begins chasing him. He tells Sarah that he did not shoot her because "You didn't roll the dice. Alan did," implying he is hunting down Alan because Alan released him from the game (as part of the rules, as everything released from the game is apparently "ordered" by the game itself to attack whomever rolled the dice at the time of its/their release). After managing to evade him, Alan explains that Van Pelt has been trying to kill him since they first met within the game's world, seemingly finding Alan's very existence to be offensive.

After he runs out of bullets, he switches his weapon at a gun shop with a sniper and silencer because his previous weapon's bullets had stopped being produced in 1903. He tries to shoot Alan from a distance when he is taken in by a police officer, his childhood friend from his dad's shoe factory, Carl Bentley, and then chases after Sarah, Judy, and Peter (who is transformed into a monkey while attempting to cheat) to steal the game so Alan will come to him for it (and for them), but his plan is once again foiled by Peter and later Alan. His next appearance is at the climax, when he holds both Alan and Sarah at gunpoint when the former is about to throw the dice.

When Van Pelt tells him to drop the dice, he orders Alan to start running again so that he can chase him. However, Alan refuses to run off this time, admitting that even though he is still scared, he no longer finds it in his heart to run away from what he's afraid of and instead face it to get it over with like his father told him. Impressed, Van Pelt acknowledges Alan of acting like a real man, and asks for any last words before he pulls the trigger.

Before his defeat, it was then the dice gave in the right number that allows Alan to win the game, and once he says "Jumanji", all of the animals and dangers of the game are sucked back into it by powerful tornado-force winds, including Van Pelt himself, much to his dismay. This also sends Alan and Sarah back to their past with their memories of the future intact before they get rid of the game and eventually begin a romantic relationship, thus altering and creating a newer and better future while Van Pelt remains sealed inside Jumanji, which is covered in chains and heavy bricks and thrown into a river by Alan and Sarah in hopes of never being found again.

Van Pelt returns as a recurring antagonist in the animated series based on the film.

He is revealed to be a part of the game, and cannot die under normal circumstances. When he actually dies in an episode after being knocked into a bottomless pit, Peter starts to become him little by little, but is saved by Alan and Judy rescuing the original Van Pelt by tossing down his rope.

His temporary death was in special circumstances due to the magic nature of the pit and in general the animated version of Van Pelt is stated to be invulnerable to harm. Indeed he is shown suffering fatal injuries such as being impaled and surviving unharmed. His later appearances are usually about hunting the heroes and failing constantly.

Unlike his movie version, who is extremely trustworthy and honorable, despite his ruthlessness, this version of the character is noticeably more certifiable, deranged, and cruel. Van Pelt has no compunction murdering children, an act his rival, Ludwig Von Richtor calls him out for and keeps the heads of humans mounted on his wall. Pelt mentions he once had a maid who eventually shot.

Van Pelt displays the ability to control certain animals in the series; summoning demonic hounds when he blows his horn, being served by a monkey butler in his lodge, using tracking weasels and summoning an elephant to use as a steed.

In the 1995 film and the animated series, Van Pelt is a truly merciless, traitorous, destructive, bloodthirsty, uncaring and cruel poacher who tries at all costs to hunt his prey to the very end. He is very murderous, sanguinary, treacherous, and manipulative, so he loves to hunt men and animals to display them on his wall. Van Pelt has a deep hatred for cowards and condemns people for displaying any acts of. While Van Pelt’s constant attempts of hunting Alan are part of the games rules, Van Pelt takes his objective of hunting Alan more personal due to Alan’s own coward like nature and has been hunting Alan since he was a child, while in the world of Jumanji.

Despite this, he seems to have something of a more noble side, as when Sarah tries to recover the game at the store, which Van Pelt was using as a bait to lure Alan, he surprises her and tells her to stop cringing, because he could have shot her at any moment. Sarah asks him why, and he says Alan rolled the dice, implying he's only after Alan because he released him from the game. Prior to that, Van Pelt snatches the game away from Sarah, Judy and Peter and seemingly tries to work out a deal with them but is interrupted by an incoming animal stampede. In his final moments with Alan, Van Pelt commends Alan for finally standing up for himself and even offers him a chance to speak his last words before shooting him.

In the series, as he is part of the game and, unlike the movie, never leaves the jungle, his moral and role are even more twisted, therefore his more positive traits are nonexistent and he is perfectly willing to hunt other humans; even keeping the heads of children among his hunting trophies. This personality is shared by his Welcome to the Jungle counterpart, although his professional background and objective differ; as an explorer, his goal is to possess the Jaguar's Eye at any cost.

As he is a vital part of the game's mechanic in the animated series, if he somehow dies (he can, indeed, die in the animated series, although it is very difficult to do so), the victor will immediately take his role (which almost happened to Peter). Also, later in the series, and not much unlike the movie, he begins to learn the game's mechanics. Although, in this case, since he never left the jungle, he understands it a little more, knowing exactly how to act according to the rules and even use it to his advantage. His most commonly used word is "Blast!", particularly when something goes wrong. 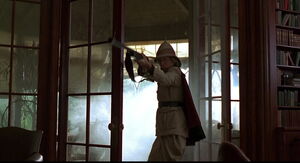 Van Pelt tries to shoot Alan after emerging from the game. 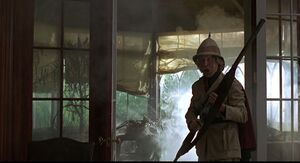 "You miserable coward! Come back and face me like a man!" 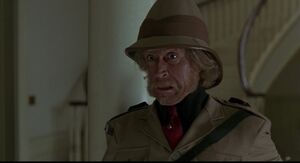 "Not good enough, Sonny Jim! Coming, ready or not." 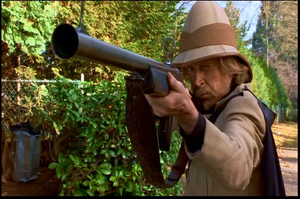 Van Pelt continues to shoot until he runs out of ammunition and gets a replacement weapon. 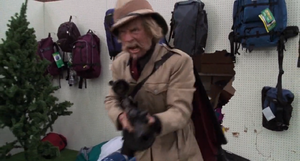 Van Pelt infuriated at having been bested 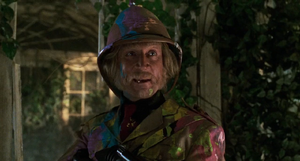 (Laughs) Good Lad. You're finally acting like a man. 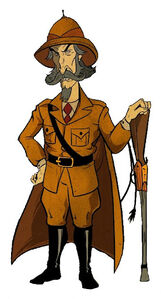 Van Pelt in the animated series. 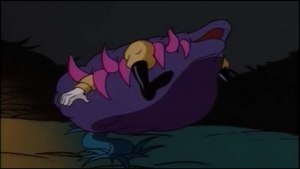 Van Pelt being eaten by pod 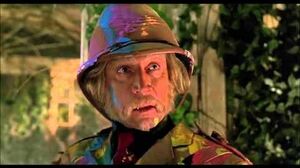