Working on the Demon Statue.

Ruling over the Yomi Kingdom.

Van Vogt, also known as Van Bogart in the Tokyopop English translation of the manga and Van Bogoot in the English dubbed version of the 2001 anime, is a high-ranking member of Black Ghost and the secondary antagonist of the Cyborg 009 anime and manga, appearing as one of the main antagonists in the "Yomi Kingdom" arc.

He serves as second-in-command to Skull and uses the public persona of a businessman to cover his dealings on behalf of Black Ghost. He is also the Black Ghost's anointed ruler of the underground Yomi Kingdom, enslaving their people to work on Black Ghost's ultimate weapon. Like Skull, Van Vogt is also a highly-advanced cyborg equipped with an Accelerator.

In the 2001 anime, he was voiced by the late Unshō Ishizuka in the original Japanese version, and in the English dub by Steve Blum, the latter of whom also played Starscream in Transformers: Prime and Vilgax. Unsho Ishizuka would reprise his role for Van Vogt's appearance in the 2007 Skull Man anime.

Bogoot later abducted three of Joe Shimamura / 009's childhood friends, Shinichi, Masaru, and Mary, and converted then into cyborg and sent then to kill Joe. However, the three could not bring themselves to kill their former friend, and Bogoot executed them for their failure.

As part of a plan to infiltrate Dr. Gilmore's base, Bogoot wiped the memories of Helen, one of the five Pu'Awak princesses, and had her enter Gilmore's home to serve as a mole. Once she was place, Vogt sent his Cyborgmen to destroy the house, leaving her to die. This prompted Helen and her sister Vena to turn on Vogt and Black Ghost and help the Cyborgs defeat them.

However, Vogt learned from Daphne what the 00 Cyborgs and Helen and Vena were planning and set off to stop them. He attempted to kill them with a drill ship, but only succeeded in separating them into two groups. Bogoot later met 006, 007, 008 and Dr. Gilmore in person when they were captured by a squad of his cyclopean robot soldiers. Bogoot told the four that "an old friend" wanted to see them and led them where Skull resided, with the cyborgs being shocked to see he was not dead. Bogoot then imprisoned them in the Yomi Kingdom's dungeon and talked with Skull about the Demon Statue.

Later, Van Vogt discovered that Daphne had betrayed her and freed the 00 Cyborgs from imprisonment. Vogt had Daphne, Dinah and Aphro cuffed. He also soon discovered that his Cyclops robots had captured Cyborg 004 and Vena. Vogt forced the Pu'Awak princesses to watch as 004 and their sister were torn apart by one of his robotic animals. However, 004 fired a missile from his leg, destroying the robot. Vogt simply deployed more of his robotic creatures. 004 and Vena were saved by 007 and 008, who pushed back the robot beasts. Vogt soon had another problem on his hands when the Zattan returned to try and reclaim the Yomi Kingdom. However, they were all obliterated when Skull activated the Demon statue.

Vogt then revealed to the cyborgs that he had captured Dr. Gilmore. Bogoot offered to exchange Gilmore for Helen and Vena. Despite Gilmore saying it would be a trap, Helen and Vena agreed to go. As soon as they meet up with the other sisters, Vogt pulls out his gun and executes the five Pu'Awak princesses for betraying him.

Vogt then fights 009 and 004. Despite 009 blasting off his left arm, Vogt continued to fight, managing to match 009's acceleration mode with his own. However, 004 was able to track Vogt by tracking 009 and shot him as he was running, killing the evil cyborg.

A highly-advanced cyborg similar to Skull, Van Vogt is also equipped with an Accelerator that allows him to move at extremely fast speeds. His limbs are also all robotic, allowing him to keep fighting without hindrance even if he's lost one. Despite this, Van Vogt mostly prefers to sit back and have his subordinates go and confront his foes rather than challenge them directly.

Van Vogt appears in the 2007 Skull Man as one of the main antagonists. Here, he appears under the name "Alucard Van Vogt" and is an executive of a multinational company known as "Brain Gear" who speaks with a thick American accent. He also has Helen as his secretary. He comes to Japan after Brain Gear takes an interest in the "Skull Man" committing murders in the city, seeking to harness the power of the Skull Man suit for Brain Gear's own purposes.

After arriving in Otomo City and forming a partnership with the Otomo Concern, Van Vogt dispatches the SIRKS cyborgs developed by Dr. Gamo Whisky to take out the Skull Man and his G.R.O. servants. The SIRKS succeeded in killing Tetsuro and wounding Skull Man and Rena, but in the process lost SIRKS 03, 04 and 05. After reporting to Van Vogt about their process, SIRKS 01 and 02 followed Skull Man and Rena to Yoshio Kanzaki's church, but were killed by Hayato Mikogami after he became the second Skull Man. Despite the loss of all five SIRKS, Van Vogt was unperturbed as he only intended to use them to test the power of the Skull Man suit.

Van Vogt later approached Major Kanji Isurugi and offered an alliance, noting that his jingoistic ideals were exactly what Brain Gear found appealing. Kanji refused and shot Van Vogt, only for Van Vogt to get up and reveal his cybernetic body, massacring all the soldiers in Isurugi's military coup before killing Isurugi himself.

After Hayato slayed Masaki Kumashiro and had his body taken over by the Skull Man suit at the end of the series, he was found by Brain Gear and transformed into Skull. In the epilogue, Van Vogt is seen bowing before Skull alongside Helen and several Cyborgmen as he takes his place as the leader of the Black Ghost organization.

Van Vogt appears briefly in the OVA as a background antagonist. He is mentioned by Dr. Gilmore as being the one who backed Dr. Adams' development of the High-Teen Number Cyborgs. 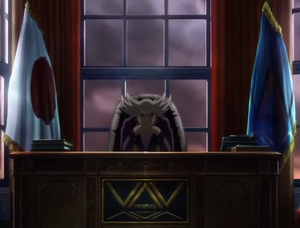 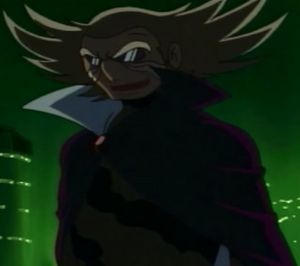 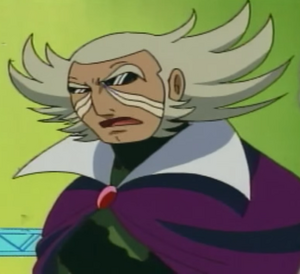 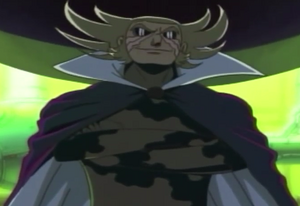