Villains Wiki
Register
Don't have an account?
Sign In
Advertisement
in: One Piece Villains, Manga Villains, Anime Villains,
and 18 more 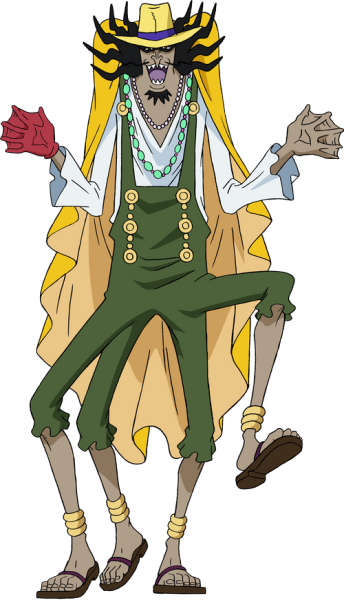 Vander Decken IX is the captain of the Flying Pirates on their ship, the Flying Dutchman, and the eighth descendant of the original Vander Decken of legend. He is a Japanese bullhead shark fish-man and the secondary antagonist of the Fish-Man Island Arc.

Decken is a tall individual with beige-colored skin (mid-dark brown in manga), slim build, and lanky limbs. His most distinguishing feature is his four legs. He has a short, scraggly goatee, a long, wavy mustache with spiky edges, and similarly, long, wavy and spiky black hair. After being rejected by Shirahoshi, he shaves the top of his head in depression. He also has sharp teeth, with bigger webs between his fingers than most fish-men, a very thin, pointy nose and a prominent hunch that puts his head on equal level with his shoulders.

He wears three golden bands on each of his ankles, and two pairs of sandals. He sports green overalls reaching just below his knees, with ruffled edges and decorative buttons on both the straps, over a light green-colored (white in the anime) shirt with ruffled edges. He sports a yellow cape, also complete with ruffled edges, draped over his shoulders, and two massive beaded necklaces hanging on his chest. He wears a yellow fedora with a purple band on his head which he seems to have had for at least ten years. In order to maintain his power's lock onto Princess Shirahoshi, he wore a red glove on his right hand at most times.

He encountered the Straw Hat Pirates when Wadatsumi stopped Ankoro, the angler fish, from eating the Thousand Sunny. Decken then ordered Wadatsumi to attack the Thousand Sunny so he could take their treasure. Unfortunately for him, the kraken, Surume, having been tamed by Luffy, intervened and defeated Wadatsumi. Decken then yelled at Wadatsumi to get up and retaliate, but was informed by one of his crew that the undersea volcano was about to erupt.

With the volcano starting to erupt, he ordered Ankoro and Wadatsumi to pull the Flying Dutchman away from the approaching magma and said that his business with the Straw Hat Pirates was not finished.

He was later seen with Wadatsumi and Ankoro, asking Wadatsumi how long it was since he had started proposing to Princess Shirahoshi. Wadatsumi replied that it had been ten years. He blamed Neptune, saying that he thought the king had a politically motivated wedding planned for her. He commented on how painful it was, as he thought that they were both in love (though really it was just him). He then brandished a large axe with a rose painted on it, saying that he would present her with it. He then threw it, but the axe doubled back and took out the mast of his ship, causing one of his crew members to tell him that he missed. Decken then crossed his arms, saying he never missed. He then declared his love for Shirahoshi by saying that he would never find another woman like her. He said it was good if her love united them, but that she cannot live her life with another man, as he would kill her if she does. He declared that she must pledge her love to him or die, saying her fate was either marriage or death.

Later, he and his crew arrived at Noah, where the New Fish-Man Pirates were waiting for him. He was told where to go, and he apologized for being late, citing his earlier trouble with the volcanic eruption. He then greeted Hody Jones and after putting on a glove, he shook hands with him. As their crews cheered them on, the two then cemented their intent: the complete collapse of the Ryugu Kingdom.

As Decken set the plan into motion, Hatchan appeared and tried to talk Hody and Decken out of going through with the operation. When Hatchan asked Decken about why he was helping the New Fish-Man Pirates when he did not help Arlong, Decken stated that he was not the kind of person who followed under anyone and his relationship with Hody was nothing more than a partnership. Hatchan was unable to sway Hody and Decken proceeded to use Hatchan as a demonstration for his powers while saying that violence is the way to express opinions. Decken then touched Hatchan, making him a target. Decken threw a knife in the air behind Hatchan, and it flew back towards Hatchan, stabbing him in the back. Decken explained that after a person becomes his target, he can hit that target from anywhere. He then sent Hatchan running when he threw a volley of arrows. With that settled, Decken then used his ability to throw a group of captive pirates and send them flying into Shirahoshi's tower, thus infiltrating the palace.

He was later seen heading for the Ryugu Palace with Hody Jones and his crew while riding on top of sea monsters. Decken was eager to have his marriage with Princess Shirahoshi. Once they entered the palace, they found King Neptune and the palace guards already subdued, courtesy of the Straw Hats. Decken was immediately met with accusations by Neptune, who assumed that Decken was behind his daughter's inexplicable disappearance. Decken denied these convictions, saying that he had yet to be properly engaged to Shirahoshi, and demanding her be returned at once would be too egotistical even for Neptune. Ignoring his statement, Neptune pressed on and angrily asked where was his daughter taken, which informed Decken that Shirahoshi was no longer in the palace.

He then went into a frothing rage, but was promptly assured by Hody that she might still be somewhere nearby, since the human pirates that Decken sent flying landed directly within the Ryugu Palace and even if she wasn't, Decken would still be able to track where Shirahoshi was. This calmed Decken and he proceeded to once again enter a bubble as he embarked outside, where he used a giant coral as a medium for his power to discern Shirahoshi's location. The coral flew away from the palace, confirming Decken's suspicions that the princess was not in Hard-Shell Tower anymore. He was then seen riding on top of the coral, stating that only "death" could keep him and Shirahoshi apart.

He soon arrived at Coral Hill and demanded Shirahoshi to marry him. She bluntly rejected him, claiming he was not her type. Enraged, Decken prepared to kill her, but Luffy got in the way. Luffy smashed the flying coral and pummeled Decken into the ground. He recovered just moments later and said to Luffy and Shirahoshi that they were not getting away as they prepared to leave on Megalo. He called out to Wadatsumi to attack them, but Wadatsumi got hit in his front tooth by Luffy's Jet Pistol. As Wadatsumi cried out in pain, Shirahoshi escaped Decken's clutches, much to the latter's anger. After Decken got away from the locals, he threw weapons at Shirahoshi several times only for them to get deflected by Luffy.

He later went back to Noah, lamenting his lost love. He was so crushed by Shirahoshi's rejection that he even shaved the top of his head. His crew tried to console him, but he did not want them to. He reminded them that even when Shirahoshi was still a child, he decided to marry her for the sake of his ancestors. He then recited a haiku to himself about his rejection, and was frustrated by Luffy saving her every time he tried to kill her. He then got an idea that he said would make everything break apart.

He touched the giant ship, Noah, with his right hand, making it fly to Shirahoshi. As Decken's crew was shocked, he stated that both Shirahoshi and Fish-Man Island would be destroyed. When Noah was above Gyoncorde Plaza in Fish-Man Island, Wadatsumi fell into the plaza. Wadatsumi begged Decken to help him, but Decken told him that he would have to be a sacrifice for the cause because he cannot stop the ship anymore once it had been launched. He then noticed that Shirahoshi disappeared from the plaza and appeared in front of Noah. When she told him that he should only kill her and not the people on the island, he showed glee at her bravery and noted her beauty knows no ends, and then threw a knife at her that hit her in the shoulder.

While Hody and Luffy climbed up to Noah, Decken threw some knives towards Shirahoshi, asking her whether she would die from her blood being spilled or Noah crashing into her. The thrown knives were blocked by Manboshi and Ryuboshi. Hody reached the deck of Noah and Decken welcomed him. Hody then pierced Decken with his trident. However, Decken managed to touch Hody with his left hand.

Decken stepped back and cursed Hody for his betrayal. He threw one of his axes towards Hody but he easily evaded it. Decken then tried to hit him once more with the knives in his sandals but missed him. Hody then bit Decken in the leg. When the axe returned for Hody, he used Decken as a shield and the axe hit Decken instead which caused him to fall in the boat.

Decken survived and started plotting to kill Hody for what he had done to him. However, when Noah shook, Decken slipped and hit his head. Decken passed out and the ship started falling towards Fish-Man Island.

After the Sea Kings stopped Noah from crashing into the island, the princes brought the unconscious Decken and Hody to the plaza and put them in chains, with Fukaboshi declaring that both pirate captains would be incarcerated forever. Decken was then locked up in the palace prison along with the officers of the New Fish-Man Pirates. He apparently remained unconscious and out of the picture when the officers woke up and critically aged by their Energy Steroids abuse.