Watching the show "Ear Candy"
Wallowing in her own fame

Prevent Mona from performing at the Hawt House (failed)

Vanessa is a citizen of Diamond City living downtown who makes her debut in WarioWare: Touched! for the Nintendo DS developed and published by Nintendo and co-developed by Intelligent Systems in 2004 as the main antagonist in Mona’s episode: Cute Cuts.

She is a famous pop star who has been at the top of the charts in Diamond City for quite some time until she lost her title as pop queen to the newcomer in the music industry Mona.

Vanessa is seen drinking tea at her mansion while watching the TV Show Ear Candy broadcasted by the Diamond City Broadcasting System and hosted by Ken the Reporter. Ken asks the audience whether the super-surly diva Vanessa will keep her number one spot on the charts. She is sure of it that she will remain her title as Diamond City’s pop queen while chuckling smugly in front of the TV. Unfortunately for her, she dropped from her number one spot on the charts to number two and thus losing her title to the new rising star in the business Mona and her band the Hot Slices. Shocked and shortly after enraged by this, the former pop queen smashes her cup of tea on the floor and then forges a plan with her two guitarists, called the Dinosaurs, to stop Mona from holding her next gig at the Hawt House.

Mona and her friends are on their way to their gig at the Hawt House when they are suddenly ambushed and surrounded by Vanessa and the Dinosaurs on their bikes. After successfully surrounding them, Vanessa leaves the rest to the Dinosaurs and takes her leave to the Hawt House while the Dinosaurs jump into their bird-resembling battle aircraft and then kidnap Art, one of the band members. Mona and the rest forget about their gig and put now all of their energy into rescuing their fellow band member.

Mona and her band make it just in time for their performance after the successful rescue of Art and this enrages Vanessa sitting in the audience realizing that her plan has failed. During the performance Mona remembers that she still has to deliver pizzas and rushes out of the building leaving her band behind without a lead singer. This gives Vanessa the idea to disguise herself as Mona and steal the show.

Unfortunately for the imposter the audience sees through the shallow act and starts throwing various small objects at her causing Vanessa to yell at the audience.

Vanessa is later seen holding a concert together with Mona, it could be implied that she no longer holds a grudge against Mona, but that cannot be said for certain.

Vanessa seems to be a person with a very fragile ego, an example where this character trait is displayed would be her initiative reaction when she lost her title as pop queen to Mona. Rather than working on a new song to reclaim her title, she tries to sabotage Mona's own music career.

She also seems to be addicted to positive attention and tries everything possible, even identity theft, just to get people to cheer for her. It is also not important to her whether she receives attention as Vanessa or as "Mona" as long as she stands in the spotlight, in this moment. Her music career seems therefore to be just a means to satisfy her desire for attention. She may have a passion for music but her urge for attention is much greater and outweighs her passion for singing. 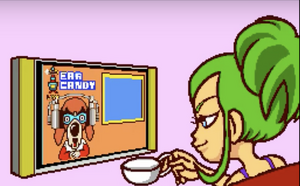 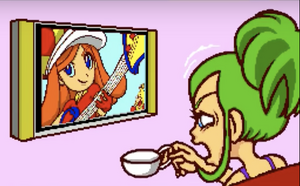 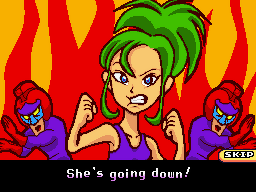 Vanessa with the Dinosaurs. 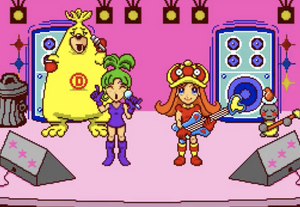