Start a Wiki
Vanessa Barone is a minor villainess in the animated series Jackie Chan Adventures. She first appears in the 21st episode of the second season, "Scouts honor", where she appears as the primary antagonist of the episode.

Vannessa is a slim woman of average height, who appears to be in her late 30's/early 40's. She has long blonde hair kept up in a ponytail. Outfit wise, she has a white/beige collar shirt, a long red trench coat, black pants, and black boots. She is often seen carrying a whip.

She first appears once in season 2, serving as the main antagonist of said episode. Her goal is to steal a rare artifact that can allow people to travel anywhere in the world. She only manages to get have of it, with Jackie getting the other half. She then tries to get the other half from him. While that was going on, Jackie was the den mother of his niece Jades girl scout troop. This lead to the troop getting caught in the mix, with the artifact causing everyone to be sent through various locations. In the end, Vanessa and the scouts get stranded on an island, and Jackie needing to use multiple forms of travel to get there, as he was left behind. By the time he arrived, the troops manage to defeat Vanessa by wrapping her up in bandages, and gagging her with an apple. Jackie thinks they used their training to so so, but really, they got it from a movie. Afterwards, Vannessa was presumably arrested for various charges, mainly theft.

She later appears in Season 5, leading four other villains from the series against Jackie. They attempt to take the artifact Jackie had recovered, only for him to escape, being rescued by a hang glider piloted by Jade. 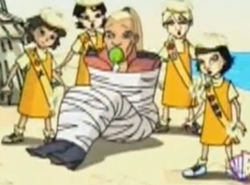 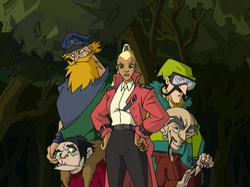 Retrieved from "https://villains.fandom.com/wiki/Vanessa_Barone?oldid=3540234"
Community content is available under CC-BY-SA unless otherwise noted.