Vanessa Dunlear is the main antagonist of the Season 1 episode "St. Lucifer" of the TV series Lucifer.

She was played by Christina Chang.

Vanessa Dunlear was the wife of Tim Dunlear, a retired basketball player, and the couple ran the Dunlear foundation together. However, Vanessa was embezzling funds from the foundation, and when Tim found out about it, she killed him. It was also revealed that Tim was having an affair with their male assistant, which Vanessa knew about.

At the foundation's latest gathering, Vanessa meets Lucifer after he was nearly shot, and she tells him that she is headed on a flight to Buenos Aires. Lucifer mentions that Argentina was where the Nazis escaped to get away with murder, and it is there that he realizes that Vanessa did kill her husband, a claim she denied. Despite her denial, Vanessa pointed a gun at Lucifer and shot him, confirming Lucifer's deduction and turning heel in the process. The villainess left Lucifer (assumingly) for dead as she walked back out to face the crowd in attendance.

To Vanessa's shock, Lucifer survives and outs Vanessa as the murderer, while Chloe appeared and revealed Vanessa's embezzling scheme. While under Lucifer's spell, Vanessa stated that she deserved the money for supporting Tim after his retirement and she had to kill him because he would "ruin everything." Vanessa was later handcuffed and arrested for Tim's murder.

Time to show your friends your true colors. Tell them all your nasty desires. 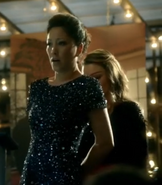