Ventus
Ventus-Vanitas (while fused with Ventus)
Creator of the Unversed

Aid Master Xehanort with his goals by merging with Ventus to create the χ-blade.

Vanitas is a Keyblade wielder, Master Xehanort's apprentice, Ventus' dark embodiment, and is the cause of infestations of the Unversed in various worlds. He is also a member of the real Organization XIII.

In the novels, Vanitas' life between his creation and the events of Kingdom Hearts Birth by Sleep is expanded upon. At first, Vanitas was a faceless being much like a Heartless but with red eyes, that felt sad for his separation from Ventus. However, that sadness soon turned to hate and contempt for what he considered his weakness. In a way, Vanitas hated himself for being so weak.

Vanitas was well aware of his existence, and soon started questioning why he was born, and every time he felt something, an Unversed would come to be. This caused him to be irritated by the fact that such a monster was born from him, so he destroyed the Unversed with his Keyblade without any hesitation; but every time he destroyed an Unversed, he himself would feel strong physical pain running through his body, and after the Unversed was destroyed, the pain and negative feeling would return to Vanitas' mind, which added more to the irritation he was feeling and in turn another Unversed of "irritation" would be born from him.

When a newborn's heart came in contact with Ventus' fractured heart, he also directly contacted Vanitas' heart. After feeling a sharp pain in his chest, Vanitas' body fell to the ground of the wasteland near the Keyblade Graveyard and almost lost consciousness, feeling being engulfed by absolute darkness. That was when Vanitas heard Sora's voice and then he saw light.

The light eventually surrounded his whole body. He then heard a voice saying "Let's open the door".

Vanitas then opened his eyes and found out that now he had a normal boy's face. He also realized that someone, probably also a newborn heart like himself, had saved Ventus' heart from completely fading away.

Because Vanitas told Master Xehanort that if he kept both him and Ventus, he could not guarantee that he could keep Ventus alive, since he found it was hard to suppress his impulse to hurt Ventus; thus, Xehanort had to take Ventus to the Land of Departure, asking Eraqus to take care of the boy. But after Ventus left, Vanitas started to miss him, and he kept wondering why they got separated from each other. This caused him to feel miserable and immense pain.

At the same time, he also felt very lost and anxious about his future; without Ventus, what would become of him? What was he supposed to do? What was the meaning of his existence? Why did he feel so suffocated in his chest? The more he thought about these questions, the more anxious, irritated, and lonely he felt. And the more he felt that, the more Unversed were created. Looking at the Unversed was like looking at his own weakness that he did not want to admit, so he started to kill them in a cycle of suffering that he could not escape.

At the same time, Master Xehanort could only coldly watch Vanitas harming himself from far away. Vanitas desperately wanted to escape from this vicious cycle of pain and suffering. But as young as he was at that time, he simply did not know other ways than killing the Unversed, until the point the pain was too much to endure, when he finally collapsed onto the ground of the Keyblade Graveyard, and cried. Tears started running down his face silently as he lay on the ground, alone. Master Xehanort came to him, telling him the only way for him to achieve salvation was to become the χ-blade.

Becoming the χ-blade was the only way for him to truly unite with Ventus again, and the χ-blade would bring salvation not only to him, but also to the whole world. Vanitas desperately wanted to free himself from this unbearable fate, thus to become the χ-blade had now become his goal, his whole life purpose, and his only light of hope to lead him out of this darkness.

Vanitas was created out of the darkness in Ventus' heart when Ventus was defeated by a horde of Neoshadows Xehanort had him fight as part of his training in order to save his heart from fading away, and Vanitas became Xehanort's apprentice. Xehanort decided to use Ventus to create the χ-blade and also as a vessel. He found that Ventus could not be a vessel but could still make the χ-blade.

After Ven's training, Vanitas arrives and taunts him about being weak before leaving and telling him that if he does not chase Terra, he will never see him again. Vanitas later met Ven at the Badlands and attempted to kill him, thinking he was too weak, but Mickey saved him and Vanitas left.

Vanitas later encountered Aqua at the Radiant Garden and they fought, but Vanitas left, revealing that it was just a test. Vanitas met Aqua again in Neverland and fought her because he no longer needed her. After the battle she faints and he leaves; it is unknown why he did not finish her off.

Vanitas later confronts Ventus and forces him to go to the Keyblade Graveyard after revealing their past.

Vanitas then fights against Aqua and Ventus at the Keyblade Graveyard and then he faces Terra with Xehanort's help, though he lives midway through the fight so he can forge the χ-blade. Vanitas knocks Aqua out and is about to finish her but Ventus recovers and fights Vanitas.

In the end, while confronting Ven, Vanitas unmasks himself, revealing his face to resemble Sora's, albeit with black hair and golden eyes. He reveals the Unversed came from him, and then would return to him once they're defeated.

During Aqua's search for Terra, she senses a strong presence in the Keyblade Graveyard. Arriving there, she is confronted by Vanitas' Lingering Spirit, who attacks her. She knows he has all of his old powers plus the Unversed's powers and the χ-blade. After a long battle, Aqua defeats him and continues her search for Terra.

When Young Xehanort appears before Sora within the cathedral at La Cité des Cloches, Ventus' heart reacts within Sora and allows him to see an image of Vanitas. In unison, the youth and Vanitas claim that Sora has made his heart into a prison, then vanish.

The real Vanitas joins the rest of the True Organization XIII during Master Xehanort's resurrection and attempts to make Sora the thirteenth vessel. However, Lea, Donald, and Goofy's intervention forces the Organization, including Vanitas, to retreat to their own times.

In Monstropolis, Vanitas is revealed to have freed Randall Boggs so he would aid him in gathering negative emotions from children. After Randall is banished for good, Vanitas tries to seize Ventus from within Sora. Goofy recalls that Ven was never able to defeat Vanitas, because they both struck each other down. In the nick of time, Sulley grabbed Vanitas and threw him into four doors with the last one being put in the shredder.

Later, Vanitas invaded the Land of Departure to take Ven while his heart was sleeping. Aqua formed a barrier to fight him one-on-one, though he had the upper hand. With Sora's plea, Ven's heart returned and pierced the barrier to save Aqua. Vanitas retreated after saying that three Guardians was more than he cared to face.

At the Keyblade Graveyard, Vanitas joined Master Xehanort, Young Xehanort, Ansem, and Xemnas in confronting the Guardians of Light before summoning an army of Heartless, Nobodies, and Unversed to assault them. Later, he joined Terra-Xehanort in fighting Ven and Aqua at the Skein of Severance. During the battle, he revealed that he isn't Ventus's darker half, but really another entity hidden deep inside of Ven before being ripped from him by Xehanort. Once Sora joined the fight, Vanitas was defeated. He revealed his face to Sora and explained their similarities because Sora's heart had replaced Vanitas as the missing piece of Ven's. Sora and Ven implored Vanitas to join them as their "brother," but Vanitas, content with being their darkness, returned to his time while his replica body was destroyed. 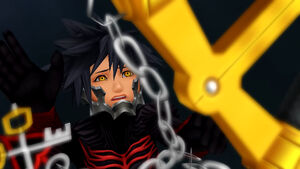 Vanitas reaching for the χ-blade upon his defeat in Birth by Sleep. 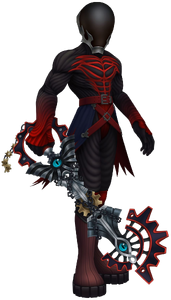 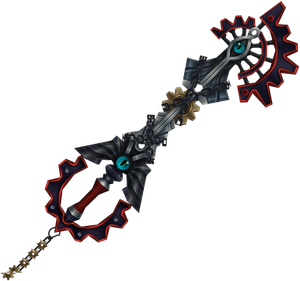 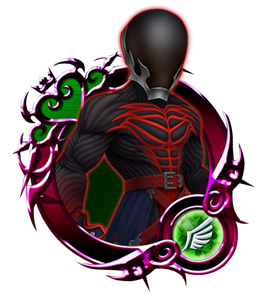 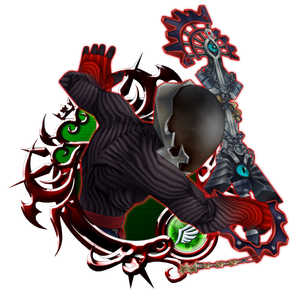 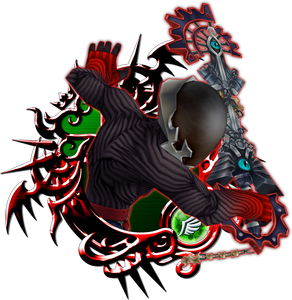 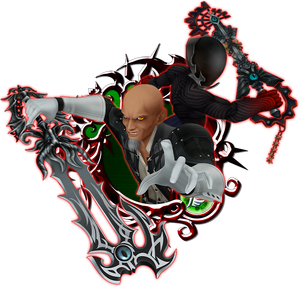 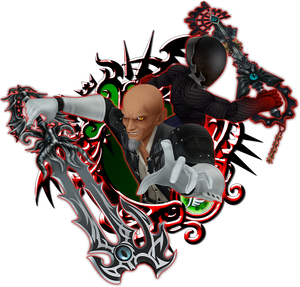 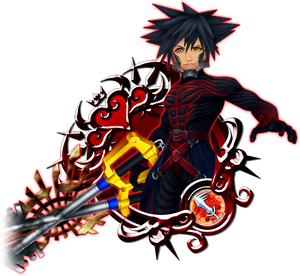 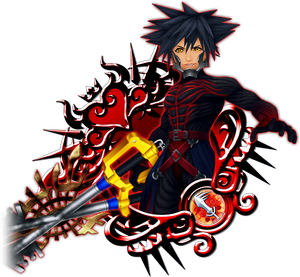 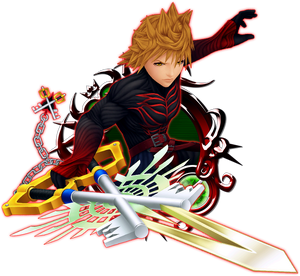 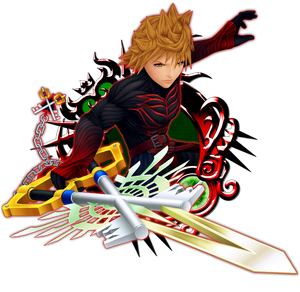 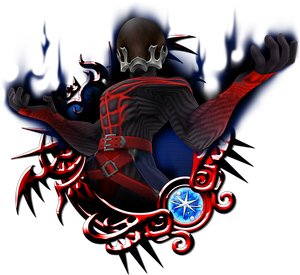 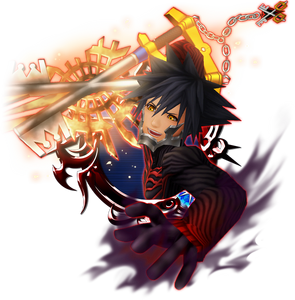 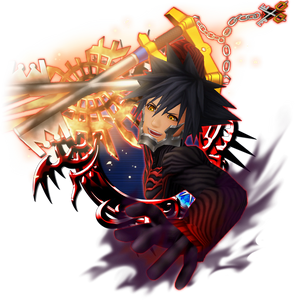 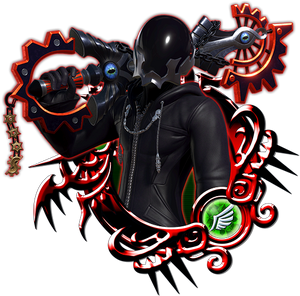 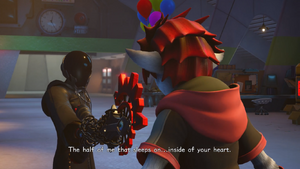 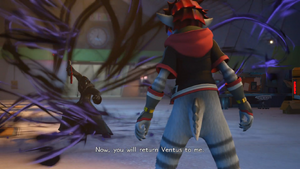 Vanitas attempting to take Ventus' heart from within Sora's. 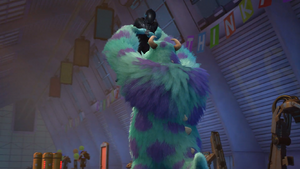 Sulley defeats Vanitas by grabbing him and throwing him into one of the doors. 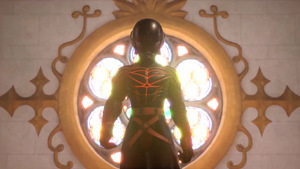 Vanitas confronts Sora, Aqua, Donald and Goofy in the Land of Departure. 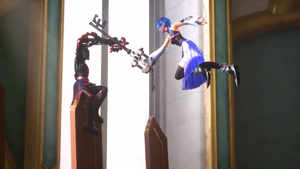 Aqua attempts to attack Vanitas but he easily repels her attacks. 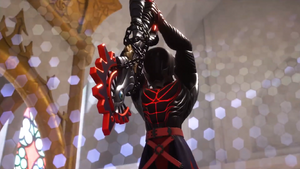 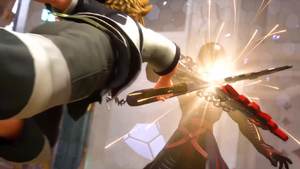 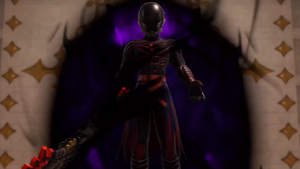 Vanitas disappears stating three guardians was more than he cared to face. 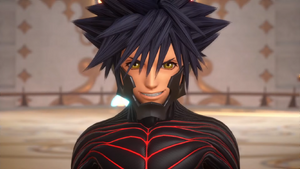 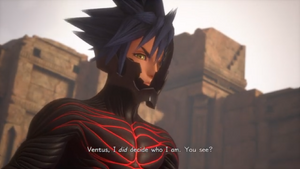 Vanitas accepting his role as darkness before fading away.