The Vanitas Remnant (in Japanese: ヴァニタスの思念, Vanitasu no Shinen) is a minor antagonist and a secret boss in the video game Kingdom Hearts Birth by Sleep. It is the physical manifestation of Vanitas' thoughts, emotions, and will.

It is voiced by Miyu Irino in the Japanese version and Haley Joel Osment in the English version, both of whom also voice Vanitas and Sora in the same franchise.

After the initial destruction of Vanitas, a final Unversed was created, this one being the most powerful one and a physical manifestation of Vanitas' negative thoughts and emotions.

The Keyblade wielders Ventus, Aqua, and Terra can travel to the Keyblade Graveyard's Badlands, where they will encounter a powerful dark energy. Upon inspecting it, a portal will open and the Vanitas Remnant will emerge and attack. The Vanitas Remnant has all the same abilities as Vanitas, including teleportation, Fire, Blizzard, and Thunder magic, durability, and incredible speed and strength. It also gains many dark abilities, such as creating dark clones, dark shields, and firing energy blasts, and can even cast Curaga if it sees the protagonist do the same. It attacks with all of these moves at blinding speeds, requiring intense dodging, blocking, and focus from the wielder. Despite its low health in comparison to other bosses, it has immense defense to compensate. When it is finally defeated, it disappears back into darkness, possibly destroyed. In the original Japanese version, its defeat nets the Keyblade wielders a Secret Gem, while in the Western and Final Mix versions its defeat yields its Void Gear Keyblade and unlocks the fight against the Mysterious Figure in The Land of Departure. 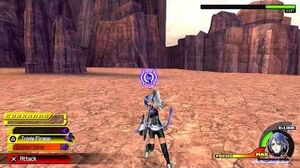