Vanessa A., also known as simply Vanny, is a major antagonist in the Five Nights at Freddy's franchise.

She is a follower of Glitchtrap, a virus connected to the serial killer William Afton, being either a recreation or his soul.

She is voiced by Jessica Tang.

Vanessa was hired as a beta tester for The Freddy Fazbear Virtual Experience, a VR game based on the Freddy Fazbear's Pizza chain in an attempt to rebrand and cover up everything that has happened decades ago. As she progresses through the game and collects hidden cassette tapes she starts to get visited by Glitchtrap in the game's level select hub, who attached himself to the tapes and is using them as a hiding place. By following the instructions of her preceding beta tester Tape Girl and narrowly avoiding a merge with him, she manages to turn Glitchtrap into a harmless plushie within the game. However, Glitchtrap enters Vanessa's mind and she is slowly being driven insane by him.

Vanessa manages to sneak the head of a white bunny suit she made into the VR game's Halloween add-on and implements it as a hidden unlockable in the Corn Maze level. After getting it she talks to Glitchtrap in his plushie form. She tells him she made the mask like he instructed (hoping he likes it) and that no one suspects anything, assuring him that she won't let him down. She will be ready for the "fun".

Vanessa was an employee of Fazbear Funtime Service working as a security guard for the company. After she was contacted by one of the developers after they accidentally created a virus from one of the animatronics' PCB, She pretended to be a Senior IT Representative from Fazbear Entertainment to trick them into giving her full access to their company to get rid of the virus.

After believing that Vanessa got rid of the virus, they returned to their usual lives and continued to work on the Service, only for for Vanessa to give unauthorized commands to their system, gaining full control over their system. She locked every employee out of their account. It's shown she made the animatronics replicas from "Special Delivery" aggressive (to the point that a Bonnie the Bunny animatronic literally ate the shop's resident stray cat).

After receiving an e-mail from Vanessa's fake credential, "_pizzaplex", it is revealed that Vanessa used them to override security protocols and allow a data packet containing Glitchtrap into the Fazbear's systems through after it was flagged as a virus and was researching the company's records of the Fazbear Entertainment Floor 3 employee, and that she transferred from the Fazbear Funtime Service to work as a security guard at Freddy Fazbear's Mega PizzaPlex.

Vanessa is set to return, now being called Vanny, trying to kill the child Gregory and his friends, while Gregory is protected by Glamrock Freddy, the titular star of the new location, Freddy Fazbear's Mega PizzaPlex. She will presumably serve as the main or central antagonist with Glitchtrap being the main or overarching antagonist.

Vanny serves as the final boss in this short Beat'em up spin-off, being fought at the end of the fourth level, a factory. She is the only enemy in the game with a ranged attack, throwing knives from a distance. In Hard Mode however she is no longer the final boss, as it adds one more boss fought right after her.

Vanessa appears to have a white complexion with freckles on her face. She has blonde hair, apple green irises, olive pupils, and glossy lips. She appears to be wearing a beige-colored security guard uniform, with darker accented shoulder pads. She also has a dark gray cap and pants.

When she isn't in her guard uniform, she takes on the name of Vanny, and wears a large rabbit suit. The suit is mostly white, but it has patches and stitches all over made of differently colored and patterned fabrics. The suit also has large red eyes that glow in the dark. 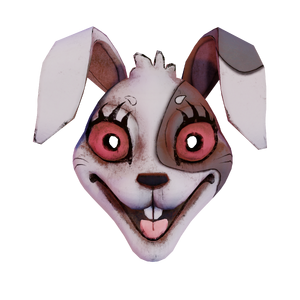 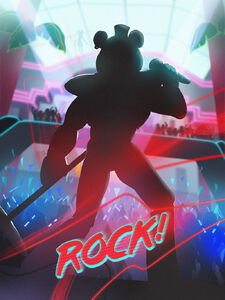 Vanny's shadow in one of the teasers for Five Nights at Freddy's: Security Breach. (Look near Freddy's left ear.) 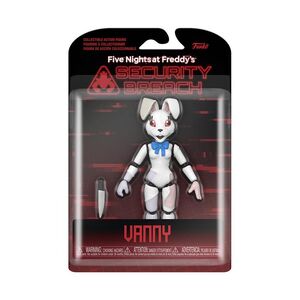 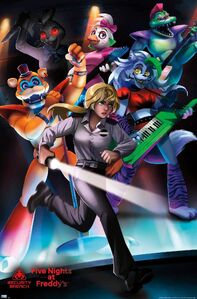 Vanny on a leaked poster. 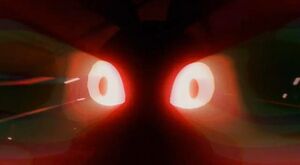 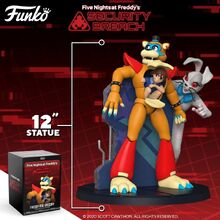 Vanny in the Glamrock Freddy and Gregory 12" Statue. 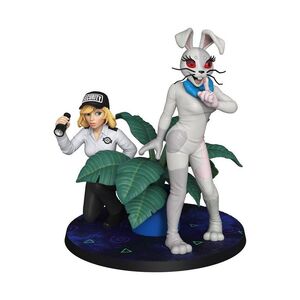 Vanny peeking from behind a door in the Security Breach gameplay trailer. 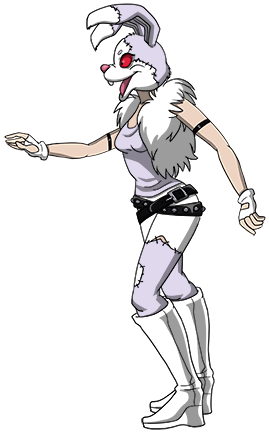