Writing songs with his band-mates from Mayhem

Varg Vikernes is the main antagonist of the infamous biographical horror-thriller film Lords of Chaos. He was the bassist of the Norwegian black-metal band Mayhem and a nihilistic and homophobic nazi supremacist (as fictionally portrayed in the film) who is responsible for several church burnings in Norway alongside band-mate and friend Euronyomous of whom he murdered later on. He is also a roughly fictionalized and evil version of his real-life counterpart. He was portrayed by Emory Cohen.

Kristian Vikernes was born in Bergen, Norway. His father was an electrical engineer while his mother was "working in a large oil company" and his older brother worked as a civil engineer. Much like Euronymous, he was heavily inspired by metal bands of the 60's, 70's and 80's such as Deep Purple, Black Sabbath and Slayer. He lived in Iraq during his childhood and took interest in the Swastika symbol and Nazism.

Kristian, currently an aspiring musician who nicknamed himself Varg took interest in the black-metal scene in Norway and attended a concert led by Mayhem. Soon after, at a restaurant, as a fan, he approaches the lead bassist Euronymous who looks down on him due to having a stitched logo of the rock band Scorpion on his jacket. Eventually, Varg meets Euronymous at his store "Helvette" managed to intrigue him and the rest of the band with his charisma, nihilism and racism. After Euronyous listened to a demo tape made by Varg's solo band Burzum, he signs him to his label which makes Varg an instant celebrity amongst metalheads. Intrigued and jealous of all the attention Varg's getting, Euronymous disses him to earn his respect and and prove that he sin't a "poser". Varg does so by burning down a church which earns him the respect of the Black Circle and other metalheads. He then became the new bassist of Mayhem as well as a wingman of Euronymous depsite having a competitive and antagonistic friendship with him)  and co-leader in his Inner Circle Black Metal cult. Together, they recorded their most famous album titled "De Mysteriis Dom Sathanas."

After a wave of church burnings begins, A fellow Mayhem band member named Faust brutally kills a gay man, leading police to link black-metallers to the crimes. Helvete is constantly on the lookout by authorities which causes Euronymous to shut the store down, and Varg is arrested as prime suspect because of an interview with a Bergen newspaper in which he claimed to be know the one who burned the churches and killed the gay man. He is soon released due to lack of evidence. Fed up with Euronymous not partaking in his anticts, Varg meets with Euronymous and tells him that he is leaving Mayhem and that he is going to start his own record label. Euronymous reveals that the "skull piece" necklaces were fakes, and that he never intended anyone to actually follow through on his angry rhetoric, which infuriates Varg.

In anger, Euronymous rants to a peer about wanting to kill Varg, but later calms down and sends him a contract to release the rights for his music back to him. Varg, having heard that Euronymous was making death threats against him, travels to Oslo in the early morning of August 10 to confront him. Telling Euronymous he wants to sign the contract, he enters his apartment and, after a brief conversation, stabs him. Euronymous pleads for his life, but Varg follows him through the apartment to the stairwell outside and stabs him to death. The next day, the news of Euronymous' murder spreads throughout Norway and Varg is soon arrested. He is sent to prison for a maximum of 21 years, guilty of both the murder of Euronymous and the burning of several churches.

Varg may come off as a clumsy, try-hard and an overly-enthusiastic individual. However he is actually a racist, homophobic, satanic, homicidal and an intelligent individual. He also did not seem to care for others and only for the cause of the Inner Circle Black Metal cult which leads him to murder Euronymous when he left his hardcore black-metal roots to redeem himself and live a low-key life while making music. At last, he is remorseless and unsympathetic as he calmly took a quick break from stabbing the helpless Euronymous by drinking a glass of chocolate milk before resuming the murder whilst taunting him. 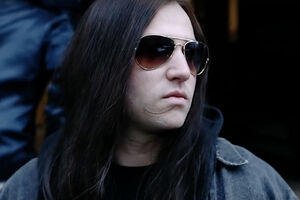 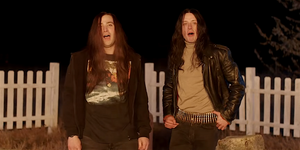 Varg and Euronymous.
Add a photo to this gallery

Retrieved from "https://villains.fandom.com/wiki/Varg_Vikernes_(Lords_of_Chaos)?oldid=3909381"
Community content is available under CC-BY-SA unless otherwise noted.