Blackmail Rafe into getting part of the treasure (failed).

Vargas is a minor antagonist in the 2016 video game, Uncharted 4: A Thief's End. Vargas is the warden of a Panama Penitentiary and an associate of Nathan Drake.

He was voiced and portrayed by Hemky Madera.

Vargas was an warden in a Panama Prison who was bribed and paid by Rafe Adler to arrest Nathan and Sam Drake, and allow them to search for Henry Avery's treasure in the outskirts.

After Nate engaged in a bloody fistfight with Gustavo in the Panama Prison, Vargas arrived just in time and stopped the fight and then sent Nate to the solitary cell. Later, Vargas showed up at the cell and escorted Nate to the outside, to a century old tower which many years ago had served as the cell of the legendary "pirate king" Henry Avery. Vargas then told Drake that he wanted part of Avery's treasure, with Nate trying to make him give up by telling him that Rafe was paying him enough, but the stubborn Vargas still wanted a cut. Nate then told him that he would search the cell and if he found anything, he would give it to Vargas. Nate climbed the tower, and found a cross of San Dimas, the penitent thief. Nate lied to Vargas and said that he had found nothing. Vargas then escorted Nate to the prison gym, where Nate went and talked with Rafe and Sam.

Nate, Sam and Rafe went to the underground of the prison to discuss what to do about Vargas and the cross, but they were interrupted by Gustavo and his thugs. After a rough fistfight between the two sides, Vargas and some other officers arrived and managed to save them before Gustavo's men could kill them. Vargas then found the cross and became angry with them due to their lies. He brought them to his office, where he told them he wanted 25% of the 400 Millions that they were hunting, which the trio reluctantly agreed. However, Rafe was angry with Vargas' stubbornness and attacked Vargas with a shiv that he recovered from Gustavo's thugs. Vargas pulled a revolver, but Rafe was quicker than him and stabbed him twice in the chest, killing him. 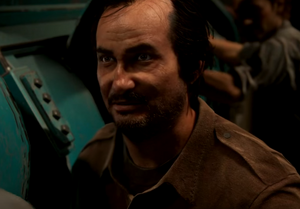 Vargas seeing the Saint Dismas cross, realizing that Nate lied to him.
Add a photo to this gallery

Retrieved from "https://villains.fandom.com/wiki/Vargas_(Uncharted)?oldid=4292704"
Community content is available under CC-BY-SA unless otherwise noted.