Take over Dragon's Peak and rule it as its king.

He is voiced by Steve Blum.

Vathek is fearfully known by others of the Dragon kind as a horrible and evil dragon who always wanted to king of Dragon's Peak himself.

When Ramses left the Dragon's Throne unattended to go flying with his dragon knight, Flavius, Vathek took the chance to sit on the throne, in which he who sits on the Dragon's throne becomes ruler of all of Dragon's Peak by Dragon law. With the power of the Throne, Vathek became king and cursed Ramses by turning him into stone. While ruling the Peak, Vathek was unaware that Flavius sought out the Skylanders for help, and they freed Ramses, and later confronted the evil dragon himself atop Dragon's Peak.

Back in his rightful place as king, Ramses begins to sadly wonder on what to do with Vathek, at first suggesting banishment. Flavious then commented that the frozen Vathek makes a "good statue", and the old dragon agreed on his behalf.

Vathek is a truly nightmarish, horrible, wicked, and evil dragon who is willing to do whatever it takes to become king of Dragon's Peak. When his goal was met, the evil dragon wasted no time in betraying his own brother, turning him to stone, before ruling the Peak with an iron wing. Vathek became strongly possessive of the Dragon Throne, claiming it solely for himself and refusing to let others take the throne. He is also dependent on the Throne's power, choosing to deal with the Skylanders by sending his minions to do the fighting for him instead of confronting the heroes directly unless all else fails. 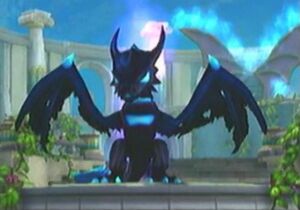 Vathek at the top of the Elder Dragon Throne. 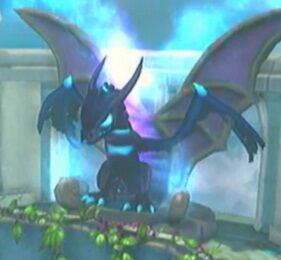 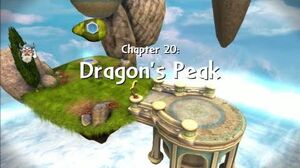