Vayle also known to many as Lady Vayle, is a Necromantress from DoomWood who apparently hates Artix, her childhood friend, for what he did to her Spirit Shard containing her brother Edgar. She saves the hero from his/her undead state that Vordred made it into by using the last of her stone.

Noxus's student, who grew up in the same village as Artix before a mysterious green mist turned everyone in the village into zombies. Vayle became the Necromantress after Noxus tricked her into thinking it was possible to bring her brother back from the dead. She briefly joins The Hero's party to defeat Noxus, then disappears, taking the Darkness Orb (which she has merged with) with her. Tomix later separates her soul from the Darkness Orb.

Vayle first appears to free the hero from Vordred's spell, then after helping him/her put Artix in Lightguard Keep's prison, sends him/her to travel across Doomwood learning information on both Artix and Vordred. 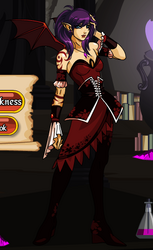 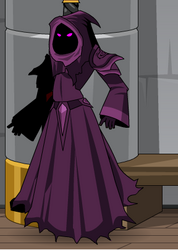 Retrieved from "https://villains.fandom.com/wiki/Vayle?oldid=3496547"
Community content is available under CC-BY-SA unless otherwise noted.