Kill his family and frame his father.

Manipulate Eleven into releasing his powers.
Escape Hawkins Lab after murdering the remaining test subject children, besides Eleven (all succeeded).
Kill all those with tragic pasts to open the gate (succeeded so far).
Kill Max Mayfield.
Kill Nancy Wheeler.
Kill Eleven and her loved ones
Open portals throughout Hawkins to free Mind Flyer on Earth (all ongoing).

Henry Creel, also known as One and Vecna, is the secondary antagonist of the Netflix sci-fi series Stranger Things.

He appears as one of the two unseen overarching antagonists (alongside the Mind Flayer) of Season 1, an unseen antagonist in Seasons 2 and 3, and the main antagonist of Season 4.

He is a mysterious psychic who is the son of Victor and Virginia Creel, the younger brother of Alice Creel, and servant of the Mind Flayer from the Upside Down, who goes on a murder spree in the town of Hawkins in order for his master to cross through portals to Hawkins so they can reshape the world.

He is portrayed by Jamie Campbell Bower, who also played young Gellert Grindelwald in Harry Potter series and Caius in Twilight.

As a human, Henry Creel was a tall and slender individual, with pale blue eyes and blonde hair, and while combed neatly and short as a child, as an adult it grew past his ears.

As Vecna, he is a towering monster which from a distance resembles a man that has been flayed of all skin, but in closer inspection it is revealed his whole muscular body is now at least partially compromised of many writhing tendrils, while his right hand remains fairly normal, the left has become a massive clawed paw capable of fully enveloping a human head. His face is now akin to a skull, lacking a nose or hair, and his eyes now give off an unnatural glow in certain lights.

As a child, Henry Creel was described by his father as a "sensitive boy” who didn’t fit in with other children. He was born with supernatural powers, and when he spotted a nest of Black Widows he found comfort. The following month, Henry grew to hate human civilization, most specifically its structure of time and evolution. Henry did not want to be a part of society doing a "mindless play" of eating, sleeping, working, reproducing, and dying, but realized he didn't have to, thus bringing Henry into a nihilistic view on the world. So after watching a Grandfather Clock, he began to have telekinesis and used his powers to torture rabbits, dogs, rats and other animals to test his abilities, but he went too far using his abilities by killing his mother and sister and attempted to kill his father, as well, but failed due to falling into a coma from exceeding his powers too much.

After being transported to Hawkins National Laboratory, being experimented on by Dr. Martin Brenner and growing up to an adulthood, he met other children with the same abilities but took interest in one child, a girl named Jane Ives, which he was kind and caring to at first, but after she witnessed murdering the other children, he became dangerously deranged and even offered Eleven to join him so they can "reshape" the world.

After she refused, he attempted to kill her but she fought back and transported him into the Upside Down.

By the time he was eventually assimilated by the Mind Flayer and thus being reborn as Vecna, he became extremely malevolent, delighting in the torment that he brings to those that he curses, just like Max. In his mind space, the corpses of his victims are displayed in a horrific fashion, showing that Vecna is proud of the unspeakable crimes that he has committed.

Harnessing psychic abilities, Vecna can detect humans in Hawkins, and just like Eleven, he can use telekinesis to kill his opponents. He can also create false visions on his victims. He appears to target humans who are suffering from some buried emotional trauma, suggesting his powers work more strongly on them. Humans who are more confident and well-adjusted may be more resistant to his powers. Also, music is an effective disruptor of his power, as it can guide one of his victims away from his influence and allow them to retake control of their own mind.

Henry Creel was the son of Victor and Virginia Creel, as well as the brother of Alice Creel. Henry grew up an outcast due to his strange behavior, resulting in him developing a deep hatred for humanity. His doctors and therapists recommended that the family relocate to Hawkins, Indiana for a fresh start.

After arriving in Hawkins, Henry became obsessed with the black widow spiders in his house due to them being lonely and misunderstood like him. He also began to realize he had psychic powers, being able to move objects telekinetically and enter minds. He started out by using his powers to torture and mutilate animals, leaving the carcasses outside for his family to find, before upgrading to invading their minds, giving them horrifying visions and nightmares.

Eventually, Victor came to the conclusion that their house was haunted by a demon, while Virginia realized the truth and decided to have Henry sent off to a mental institution. Realizing this, Henry brutally murdered his mother and sister. While trying to do the same to his father, Henry over-exerted himself and passed out. Victor was arrested for his son's crimes and sent to an asylum due to his ramblings about a demon in their house.

Henry was abducted by the Hawkins Laboratory, who faked his death. Dr. Martin Brenner tried to perform experiments on him and control him, but after repeated failures, Brenner gave up and started using his DNA to create more psychics like him, including Eleven. Brenner also put a chip in Henry's neck that would track him and obstruct his powers.

After being forced to become a guard for the lab, Henry met Eleven and began mentoring her, telling her to use her rage and grief to unlock her full potential. Henry began to turn Eleven against Brenner, telling her the truth about her mother and tricking her into thinking that Brenner wants the other psychic children to kill her. Henry discreetly gives Eleven a keycard, allowing her to meet up with him in the lab's boiler room, where Eleven offers to remove the chip in his neck so they can escape together. After she does so, Henry regains his powers and kills some security guards, before leaving Eleven in a closet and telling her to wait for him.

Henry proceeds to go on a rampage, slaughtering everyone in the lab, including the children. After Eleven walks in on him torturing and killing Two, Henry explains his backstory and hatred of humanity. He offers Eleven to join him so they can "reshape" the world, but Eleven rejects. Henry and Eleven get into a telekinetic duel, in which Henry gains the upper hand. But after tapping into her traumas and rage, Eleven regains control and defeats Henry, sending him through the very first gate into the Upside Down, with the gate closing immediately afterwards.

Falling through the Upside Down, Henry is struck by lightning, scarring his skin, before being assimilated by the Mind Flayer.

After the Mind Flayer's previous defeat, Henry established a psychic connection with several teenagers in Hawkins: Chrissy Cunningham, a cheerleader; Fred Benson, an aspiring reporter and Nancy Wheeler's sidekick; Max Mayfield, a member of the Party; and Patrick McKinney, a basketball player and the friend of Jason Carver, who witness the murders and attempted to find the truth.

Starting with Chrissy, Henry invades her mind, tormenting her with visions of her abusive mother, before killing her. The murder rips a hole into Hawkins, creating a new gate. Henry then repeats the process with Fred, this time showing him visions of a car accident that killed someone that was with him. After these two murders, Dustin Henderson nicknames him "Vecna", after a Dungeons and Dragons character with similar powers.

Dustin, Max, and Lucas Sinclair begin investigating Vecna along with Nancy Wheeler, Steve Harrington, Robin Buckley, and Eddie Munson, the latter of whom was accused of Chrissy's murder. Vecna attempts to invade Max, but she flees, accidentally entering Vecna's mind in the Upside Down. Trapped in his domain, Vecna attempts to kill her, until the rest of the group realize that music can break Vecna's spell (which Nancy and Robin learned from the imprisoned Victor) and use Max's favorite song to help free her.

Max draws Vecna's domain, which Nancy recognizes as the Creel house, unaware that it's actually Vecna's childhood home. As the group looks through the Creel house, Vecna claims Patrick as his next victim, causing the group's flashlights to short out. After realizing Patrick's murder took place at the same time, they come to the conclusion that Vecna is using the Creel house in the Upside Down as his base of operations.

The group tracks down one of Vecna's gates, located at the site of Patrick's murder. However, Vecna pulls Steve into the gate, with Nancy, Robin, and Eddie following after him. Vecna uses his minions, a race of Demogorgon-like bats to stalk them as they attempt to find another way back.

Dustin and Lucas realize that Vecna is likely the Mind Flayer's "general", and is opening up gates to allow their old nemesis to invade Hawkins once more. Dustin, Lucas, Max, and Lucas' sister, Erica, contact the other half of the group through a series of lights, and instruct them to go to the Upside Down's equivalent of Eddie's trailer, which is where Chrissy died. There, the two groups find a gate, and Eddie and Robin pass back into Hawkins. However, Vecna invades Nancy's mind before she and Steve can get through.

Vecna torments Nancy with Barbara Holland's corpse and forces her to relive the night of her death, before Nancy escapes. Much like Max, Nancy finds herself in Vecna's mind, seeing his past and realizing that he is Brenner's first experiment.

At the same time, Eleven discovers Vecna/Henry’s true desires to assist the Mind Flier just before she disintegrated his human body and reveals his vessel form. 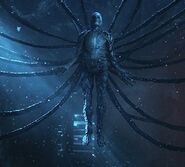