Agent R-7
The Ravager of Worlds

Currently supervillain
Leader of the U-Foes

Supervillain
Vector is a supervillain from Marvel comics and a member of the U-Foes, a gang of criminals who act a bit like an evil-version of the Fantastic Four. He is a member of Thunderbolts.

Simon Utrecht was obsessed with gaining power to go up into space. Utrecht and his crew were interrupted by the Hulk before they crashed back to Earth, much like the Fantastic Four themselves did. Upon seeing themselves after the crash, the quartet have become the newly-christened U-Foes. The U-Foes became professional criminals, and clashed with many heroes including the Avengers.

Vector, along with the other U-Foes, registered under the Superhuman Registration Act, and served in Norman Osborn's forces, before joining the Hood's Gang.

Vector possesses limited telekinetic abilities allowing him to cause objects to accelerate away from his own body. This also means Vector is able to fly (by "repelling" the ground beneath himself.). This ability is so powerful, Vector was able to flay the nigh-invulnerable skin and some muscle tissue off The Hulk's body during a battle. 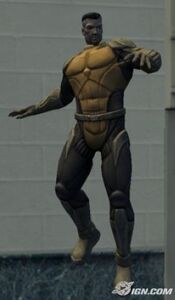 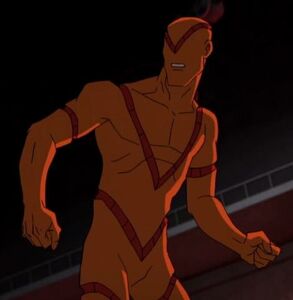