Vegetor is a one-time villain from Teen Titans Go!, only appearing in the episode "Vegetable". He is a giant orange anthropomorphic carrot who possesses godlike powers and leads a cult of vegetarians.

Beast Boy convinced the rest of the Teen Titans to become vegetarians. This seemed to be a good thing at first before the other Titans started to turn green and become entirely made out of vegetables. When the Titans spotted Beast Boy eating an apple, they assumed this was betraying the vegetarian code and they attacked him, knocking him out cold.

When Beast Boy awoke, he appeared in a dark evil lair, with the titans surrounding him, wearing green cloaks. He learned that ever since the other Titans became vegetarians, they had joined a cult of vegetarianism and their leader was a giant anthropomorphic carrot god named Vegetor, who was leading them to follow him on the path to joining his "vegetable kingdom".

Vegetor needed to crush Beast Boy for having a filthy "meat body" and he used his telekinetic powers to lift up a giant squash to squash Beast Boy. As Beast Boy was slowly getting crushed he asked Cyborg what time it was, which caused him to remember how much he loved answering that question with "Meat Party Time!" Cyborg broke character and started dancing around, firing meatballs into the mouths of all the other Titans, which turned them back to normal too.

The Titans all went over to a table and started eating meat. Vegetor smelled the delicious meat smell and could not help but to join them. He broke his own vegetarian code and started eating meat with the Titans, freeing Beast Boy from the squashing of the squash. Vegetor had a huge party with all of the Titans, where they all ate a ton of meat. However, Vegetor went overboard and ate way too much meat, making him extremely fat and out of shape. This did not stop him from eating more, which was enough to cause him to explode to death. 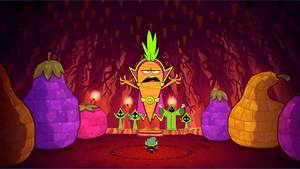 Vegetor in the audience of The Titans Show.