Vegiemon is a minor villain in the Digimon Adventure series. He resembles a yellow squash-like creature with blue Indian-like feathers on his head, red eyes and two tentacles.

Vegiemon made his first appearence who runs a restaurant with Digitamamon. Vegiemon forced Matt, Joe, Gabumon, and Gomamon to work at his restaurant for him.

During the battle with Digitamamon, Vegiemon captured T.K., but Joe saved him, only to be seized by Vegiemon's tentacles. After WereGarurumon defeated Digitamamon, he threatened Vegiemon that if he dosen't put Joe down, he will be salad. And with that, Vegiemon forced to put Joe down and ran away. (He is never seen again, meaning that he was killed offscreen by Myotismon). 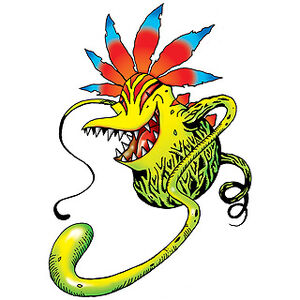 Retrieved from "https://villains.fandom.com/wiki/Vegiemon?oldid=2994320"
Community content is available under CC-BY-SA unless otherwise noted.