The Velociraptors are the main antagonists in Carnosaur 2 and Carnosaur 3: Primal Species.

In this film, it's revealed that many Velociraptors have been hidden in a nuclear mining facility after the events of the first Carnosaur film.

One day, the Velociraptors kill all people in the nuclear mining facility, except a teenage boy named Jessie. Later, a group of technicians and scientists come to the facility with a helicopter but they are rapidly attacked by the Velociraptors. One of them kills the helicopter's pilot, which destroys it and blocks the group in the facility. However, they manage to contact an evacuation squad who will come rescue them, but they have to go to the surface in order to take the rescue helicopter that they will send. The group decides to use dynamites to explode the facility, but things go wrong and the Velociraptors kill almost all of them. However, two injured members of the team choose to sacrifice by blowing themselves up, which kills all the Velociraptors. Ultimately, only Jesse and a member of the group named Jack manage to survive and they use a remote detonator to detonate the dynamite after their leaving, destroying the facility.

Two male Velociraptors are among the three dinosaurs which have been frozen in an army convoy, along with a female Tyrannosaurus.

However, some terrorists attack the convoy and accidentally release the dinosaurs. The Velociraptors kill most of them and also some policemen. Afterwards, a military team led by Colonel Rance Higgins arrives to investigate and they discover the Velociraptors.

Later, the three dinosaurs goes on a massive meat shipment but the militaries set up a lure and net trap with meat. A Velociraptor comes and attacks one of the militaries, but he is shot down. He is took back to the lab but he manages to regenerate and wake up, then he attacks the team but he finally flees.

Finally, the militaries infiltrate the ship in order to kill the dinosaurs with dynamites. However, things go wrong and all the militaries are killed by both the Velociraptors and the Tyrannosaurus, except Rance. He manages to explodes the ship soon after his leaving, killing all of the carnivorous dinosaurs.

However, a Velociraptor is still alive and he kills the sole surviving terrorist in a police car. 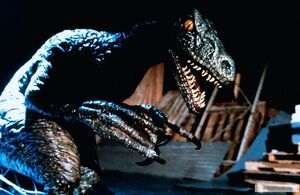 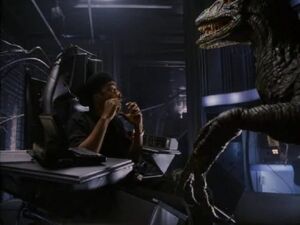 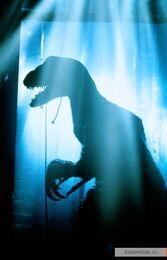 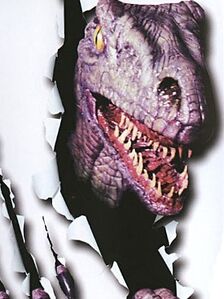 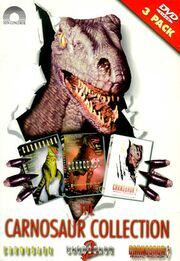 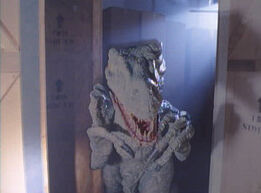 Albino Velociraptor (Carnosaur 3: Primal Species).
Add a photo to this gallery
Retrieved from "https://villains.fandom.com/wiki/Velociraptors_(Carnosaur)?oldid=4081133"
Community content is available under CC-BY-SA unless otherwise noted.