Cleanse the mankind of its sins and decadence.

Il Veltro (Italian for "The Greyhound"), also known simply as Veltro, is a ruthless bioterrorist organization and a villainous faction in Resident Evil: Revelations. The members of the Veltro group all wore gas masks, concealing their true identities.

Initially, Il Veltro was once a student group formed around the idea that Earth had become sinful and decadent; a living equivalent of Italian author Dante Alghieri's depiction of Hell in his epic poem "Inferno", part of the "Divine Comedy". Il Veltro was radicalised and financed by General Morgan Lansdale, the commissioner of the American Federal Bioterrorism Commission, who used the terror created by Il Veltro to further solidify his own position of power.

In 2004, Veltro, armed with Unmanned Aerial Vehicles (UAVs) - courtesy of Lansdale - dispersed the t-Abyss Virus (given to them by their "financier", Lansdale) over the Mediterranean city of Terragrigia, and released a large number of Hunter type B.O.W.s (A kind named "Farfarello" in reference to the Malebranche in Inferno) into the city.

With the Veltro threat evident to the world, Lansdale saw no more use for them and made preparations to have them killed. Five days into the three-week battle, the virus was leaked on both the Queen Zenobia and Queen Semiramis, killing or infecting the Veltro agents on board.

On the last day of the Terragrigia Panic, Veltro leader Jack Norman, on board the Queen Dido, realized that Lansdale was responsible. Foreseeing yet another threat, Norman activated the Queen Didos self-destruct sequence. Many Veltro agents died during the explosions and subsequent sinking, some in mid-transformation into globsters.

At least seven people survived the sinking of the Queen Dido, having been saved merely by the design of the ship and being sealed in an area not yet flooded. They counted the days of their entrapment on a dining room wall in blood, lasting a year until Lansdale ordered an F.B.C. team to investigate the wreck in search for incriminating evidence linking himself to the Terragrigia Panic. In the skirmish that ensued, Norman was the only survivor. Knowing full well that Lansdale was searching for Norman's PDA, Norman recorded a final message exclaiming that the F.B.C. commissioner would never get his hands on the PDA before he injected himself with a sample of the t-Abyss virus. B.S.A.A. agents Chris Redfield and Jill Valentine reached the un-flooded area shortly after Norman infected himself. Finding him in a throne room, he made one final protest against Lansdale before convulsions led him to drop the PDA for the agents to pick up.

They attempted to leave but the insane Norman, determined to exact revenge on Lansdale, consumed a large quantity of the t-Abyss virus and mutated into a marine creature referred to as the "Ultimate Abyss". He attacked Chris and Jill who were forced to kill him. As he lay dying, he regained enough sanity to realise that Veltro was finally finished and that his suffering was at an end. With his death, the last remants of the organisation died with him and Veltro was truly gone for good. 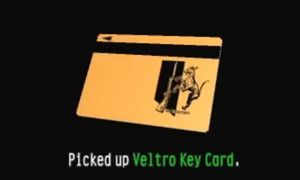 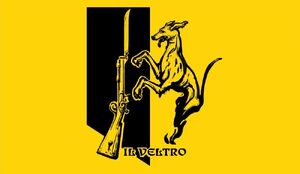 The crest of the bioterrorist group known as Il Veltro (Veltro).