Spenting time with Vox and Valentino.

Velvet is a major antagonist in Hazbin Hotel.

She is a member of a group of Hell's Overlords known as The Three Vs along with Vox and Valentino.

Velvet is a slim demon with slightly grey-brown skin. She has velvet, maroon, and white hair tied into pigtails with black and white lace hair ties holding her hair up. She seems to be wearing white clown eyeliner with burgundy eyeshadow. She has white irises and red sclerae.

Velvet wears a black, velvet, and white tea-length dress with short puffed sleeves including various heart designs and velvet lace at the bottom. She wears white and velvet striped evening gloves and black tights or stockings. Her shoes are velvet flats with white pom poms on the top.

Velvet is the energetic, stylish and trendy type who is always up-to-date with the latest trends and technology. Faustisse, an illustrator for the show, has described her as being a "very crazy person". She's also obsessed with taking selfies. 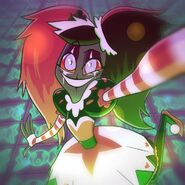 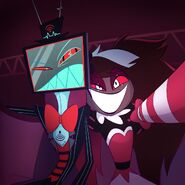