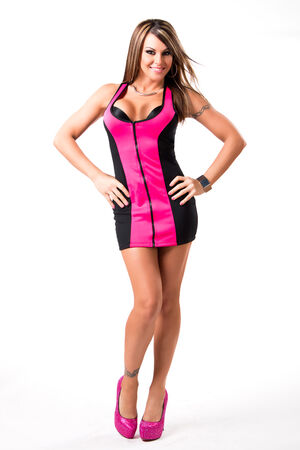 Velvet Sky is a former TNA Knockout who has held the Knockouts Championship on two occasions, and also had one reign as Knockouts Tag Team Champion. She is best known for portraying a villainess in TNA, which she has done twice.

Velvet debuted in TNA with Angelina Love in 2007, and within months, both women would become villainesses when they attacked Roxxi LaVeaux while they attempted to give her a makeover. Velvet and Angelina were officially referred to as The Beautiful People, and in this role, Velvet was basically second-in-command behind Angelina; a role she maintained even after Madison Rayne joined them in 2009. After Angelina left TNA due to issues with her work visa, Velvet became the new leader of the faction, with Madison second-in-command and Lacey Von Erich as their new cohort. The trio spent weeks feuding with Sarita and Taylor Wilde over the Knockouts Tag Team Championship, but after Angelina returned as a babyface in 2010, the trio--especially Velvet--feuded with her for several months. After Madison became Knockouts Champion at Lockdown that year, Velvet became tired of Madison's inflated ego. Her frustration with Madison led to a face turn for Velvet and a reunion with Angelina by the fall of 2010.

Velvet's second stint as a villainess began on March 27, 2014; two weeks after Angelina Love returned to TNA. Angelina returned and made an offer to Velvet to reunite The Beautiful People on March 13, which Velvet accepted a week later. Madison Rayne turned down Angelina's offer, much to the shock of both her and Velvet. Unbeknownst to Velvet, Angelina attacked Madison in the locker room, and ordered Velvet to pick a side later in the evening during Angelina's match against Madison. During the match, Velvet made her appearance and acted conflicted between both women, but later on, the evil Velvet attacked Madison at ringside and placed her back in the ring so Angelina could defeat her. After the match, Velvet laughed evilly at the beaten Madison and celebrated with Angelina in the ring. In an exclusive interview, both Velvet and Angelina revealed that they set Madison up all this time.

Much like when they were together the first time, Velvet basically acted as Angelina's sidekick, often spraying hair spray in the eyes of Angelina's opponents to help her win. In fact, she did just that at Sacrifice to help Angelina win the Knockouts Championship. Velvet has engaged in feuds with not only Madison, but Gail Kim and Brittany as well. In the latter half of 2014, both Velvet and Angelina would act as love interests for The BroMans (Robbie E and Jesse Godderz), and they mainly feuded with The Menagerie, which included fellow TNA Knockout Rebel. On January 23, 2015, Velvet helped Robbie win one of the four Feast of Fired briefcases, but it contained a pink slip. Since Velvet was the one who retrieve the case, it was hers to open, and as a result, her TNA tenure came to an end. On May 8, 2015, Velvet returned to TNA and attacked her evil former partner, Angelina Love, cementing herself as a babyface once again.

As a villainess, Velvet is self-centered, seductive, and very vicious, if necessary. She has shown loyalty to Angelina Love many times, but her actions towards Angelina in 2010 and her betrayal of Madison Rayne in 2014 suggest that Velvet can be self-serving.

Add a photo to this gallery
Retrieved from "https://villains.fandom.com/wiki/Velvet_Sky?oldid=1991383"
Community content is available under CC-BY-SA unless otherwise noted.